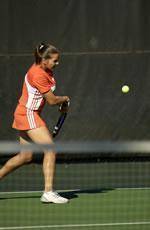 WINSTON-SALEM, NC – The Clemson women’s tennis team concluded competition at the ITA Southeast Regional Tournament on Sunday. The Tigers’ top two doubles teams fell in semi-final play after capturing three wins each in early round action. Clemson will return to action on Nov. 4-7, as the Tigers travel to Ann Arbor, MI, for the ITA National Indoor Championships.

In the semi-finals of the main doubles draw, Daniela Alvarez and Maria Brito fell to Sarah Foster and Aibika Kalsarieva of Kentucky by a score of 8-3. They defeated Wake Forest’s Karin Coetzee and Ashlee Davis by a score of 8-4 in the quarter-finals, after defeating Ashleigh Murray and Laura Swain of Charlotte by a score of 8-2 in the round of 16. Brito and Alvarez won their round of 32 match over Alet Boonzaaier and Marina Tasheva of Tennessee Tech by a score of 8-0.

Julie Coin and Alix Lacelarie also lost in semi-final doubles action, as Kim Coverntry and Loelle Schwenk of Kentucky edged the Tigers’ duo by a score of 9-7. In the quarter-finals, Coin and Lacelarie scored an 8-3 victory over Katie Blaszak and Jackie Carleton of Duke, and downed Kirstin Buchanan and Mireia Gol of East Carolina, 8-2, in the round of 16. Coin and Lacelarie began their tournament with an 8-3 victory over Blakely Offutt and Danielle Schwartz of Wake Forest.