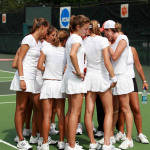 Tigers To Face Stanford In NCAA Round Of 16 On Thursday

CLEMSON, SC – The Clemson women’s tennis team advanced to the NCAA Championships round of 16 for the fourth time in the last five years. The 13th-seeded Tigers (17-9) will take on #4-seed Stanford (21-4) on Thursday, May 15 at the Michael D. Case Tennis Center in Tulsa, OK. The match is scheduled for 9:00 (CST) on the campus of the University of Tulsa.

Thursday’s meeting will be the ninth in history between Clemson and the Cardinal with Stanford winning each of the previous eight. The two teams last met in the semifinals of the 2005 NCAA Championships in Athens, GA. The Cardinal won the match, 4-2, but the Tigers were the first team that season to notch two points against them.

Clemson has won its last 12 matches, including a pair of NCAA regional contests to reach the round of 16. The Tigers swept Winthrop, 4-0, in the first round before defeating 19th-ranked Michigan, 4-1, in the second round. Both matches were held on Clemson’s home court as the Tigers played host to a regional for the fifth straight year.

Sophomore Ani Mijacika heads the Clemson line-up with the #2 national singles ranking. The native of Makarska, Croatia currently boasts a 28-6 overall record and has partnered with senior Carol Salge to post 11 straight doubles victories. The duo is 15-2 and ranks fourth in the most recent doubles poll.

Clemson’s NCAA Championship History The Tigers have advanced to the NCAA Round of 16 in four of the last five years and own a 20-15 record in NCAA Tournament matches. Since NCAA regional play began in 1996, the Tigers have made the field of 16 five times, with the first being in that inaugural season.

Clemson won three matches in the 1996 Southeast Regional to claim the regional title and reach the quarterfinals of the national tournament, where they fell tto Stanford. Since then, the Tigers have advanced to the NCAA Championships in 2004, 2005, 2007 and 2008. They reached the Final Four in 2004 and 2005.

Last season, Clemson defeated Coastal Carolina and Virginia in regional competition to advance to the round of 16. The Tigers then fell to California, 4-0, to end their run.

Scouting Stanford The Cardinal earned the #4 seed in the 2008 NCAA Tournament and improved to 21-4 with a pair of victories in the opening two rounds. Stanford claimed a share of its 21st consecutive Pac-10 title this season with a 10-3 conference record.

The Cardinal hasn’t lost a match since a 4-3 defeat to #21 Arizona State on Mar. 28. Its only other losses in 2008 were suffered against #3 Georgia Tech (4-3) at the USTA/ITA National Team Indoor Championships in February and versus Pac-10 foes UCLA and California.

Stanford defeated Boston University, 4-0, in the first round of the regional held on its own campus and then won a 4-1 decision against Texas A&M to advance to the round of 16.

Six Cardinal players are ranked in the top 100 of the Fila/ITA Tennis singles poll, lead by Hilary Barte at #3. Barte owns a 29-6 record for the fall and spring seasons combined. She and partner Lindsay Burdette are listed in the top 10 of the doubles rankings at #9.