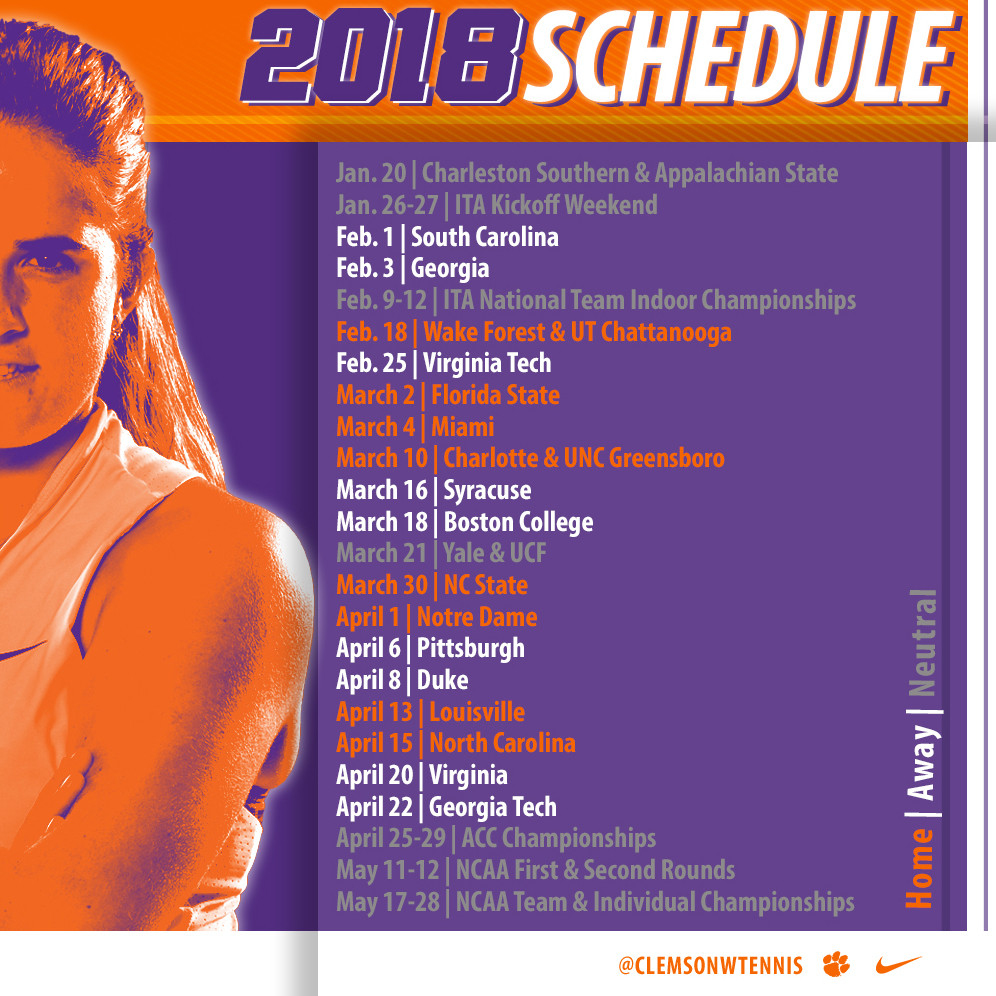 CLEMSON, S.C. – The Clemson women’s tennis team is set to play 10 home matches at the Anderson University Tennis Facility in the spring of 2018, while construction is ongoing for a complete renovation on the Hoke Sloan Tennis Center on Clemson’s campus. The spring schedule also features the annual Duckworth Doubleheader in Charlotte, N.C., the ITA Kickoff Weekend in Columbia, S.C. and a Spring Break training trip and two matches at the USTA National Campus in Orlando, Fla.

The Tigers open the season on Jan. 20 with the Duckworth Doubleheader against Charleston Southern and Appalachian State, with matches to be held at the Charlotte Indoor Tennis Club in Charlotte, N.C. The following weekend, the team heads to Columbia, S.C. for the ITA Kickoff Weekend, which features the Tigers, along with South Carolina, Southern Cal and Oklahoma.

February opens with a return trip to Columbia for a dual match against South Carolina on Feb. 1, followed by a Feb. 3 match against Georgia in Athens. The ITA National Team Indoor Championships are scheduled for Feb. 9-12 in Madison, Wis.

The Tigers open ACC play on Feb. 18 with a home match against Wake Forest, followed by a second match against UT Chattanooga that afternoon. Clemson faces Virginia Tech on the road on Feb. 25 before returning home for four-straight matches, against Florida State on March 2, Miami on March 4 and a doubleheader with Charlotte and UNC Greensboro on March 10.

Clemson heads north for ACC contests at Syracuse on March 16 and Boston College on March 18, before traveling to Orlando, Fla. for its annual spring break training trip, which includes a doubleheader against Yale and UCF on March 21, to be played at the USTA National Campus facility.

After spring break, the Tigers play four ACC matches at home (NC State on March 30, Notre Dame on April 1, Louisville on April 13 and North Carolina on April 15), and four on the road (Pittsburgh on April 6, Duke on April 8, Virginia on April 20 and Georgia Tech on April 22). The ACC Championships return to Cary, N.C. in 2018, scheduled for April 25-29 at Cary Tennis Park.

NCAA tournament play begins with the first and second rounds on May 11-12 at campus sites. The NCAA Team Championships are set for May 17-22 at Wake Forest Tennis Complex, followed by the NCAA Individual Singles & Doubles Championships from May 23-28, also in Winston-Salem, N.C.