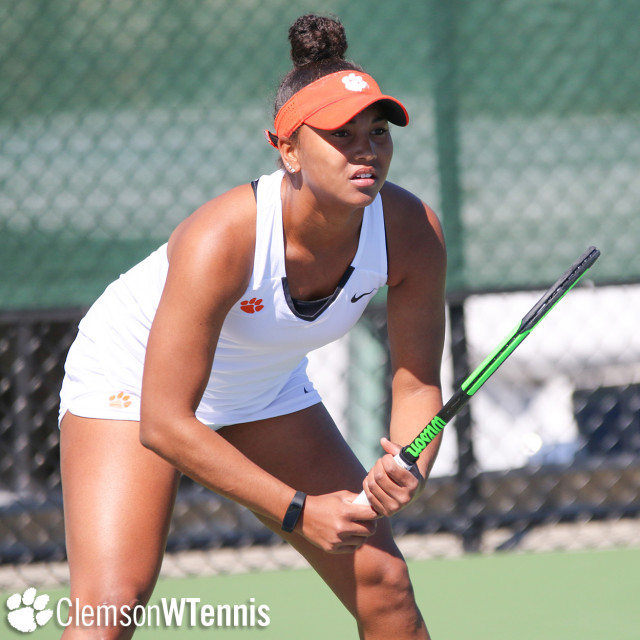 Tigers Drop 5-2 Decision to Orange On the Road Friday

SYRACUSE, N.Y. – The Clemson women’s tennis team won the doubles point, but Syracuse claimed five of the six singles matches for a 5-2 victory at Drumlins Country Club in Syracuse, N.Y. on Friday afternoon. With the loss, the Tigers, ranked 44th in this week’s ITA poll, drop to 7-7 (1-4 ACC), while the Orange, ranked 39th, improve to 11-2 (3-2 ACC).

The Tigers won the doubles point for the ninth time on the season. Marie-Alexandre Leduc and Fernanda Navarro, ranked 60th nationally, opened with a win at No. 1, upsetting 17th-ranked Knutson and Ramirez, 6-1. Ally Miller-Krasilnikov and Tate Schroeder clinched the doubles point for the Tigers, downing their Syracuse opponent 6-2 at No. 2. It was the fifth-straight win for Leduc and Navarro, and the third straight for Miller-Krasilnikov and Schroeder.

Syracuse came out aggressively in singles play, picking up straight-set wins at No. 6, 3 and 2, in that order. Schroeder, who moved up to No. 2 singles, forced a tiebreak in the first set, falling 7-6(2), 6-1. It was a tight battle of two top-20 singles players at No. 1, but 20th-ranked Leduc fell to 11th-ranked Gabriela Knutson, 7-5, 7-5. Miller-Krasilnikov dropped the first set, but rebounded to win the second and force a third, before falling at No. 5 singles. Sydney Riley earned the lone point for the Tigers in singles, winning at No. 4, 6-4, 4-6, 1-0(10-8). It was the fourth win in a row in singles play for the sophomore from Dallas, Texas.

Clemson stays in the northeast for another ACC road match on Sunday, March 18, at Boston College. The Tigers and Eagles will square off at 11 a.m. at Flynn Recreation Complex in Chestnut Hill.