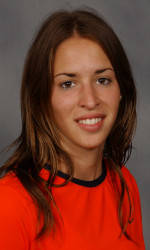 CHAPEL HILL, NC – Clemson women’s tennis players Carol Salge and Ani Majacika advanced to the semifinal round of the 2006 Wilson/ITA Southeast Regional after winning their quarterfinal match on Sunday. The pair will compete in the semifinals on Monday at 10:30 a.m. at the Cone-Kenfield Tennis Center on the campus of the University of North Carolina.

Salge, a junior from San Roque, Brazil, and Majacika, a freshman from Makarska, Croatia, defeated Ashlee Davis and Sasha Kulikova of Wake Forest by a score of 8-1 in Sunday’s quarterfinal. They will face North Carolina’s team of Caitlin Collins and Sanaz Marand in the semifinal round. Both teams were seeded 5-8 entering the tournament. The winner of the semifinal will compete in the championship match on Monday afternoon.