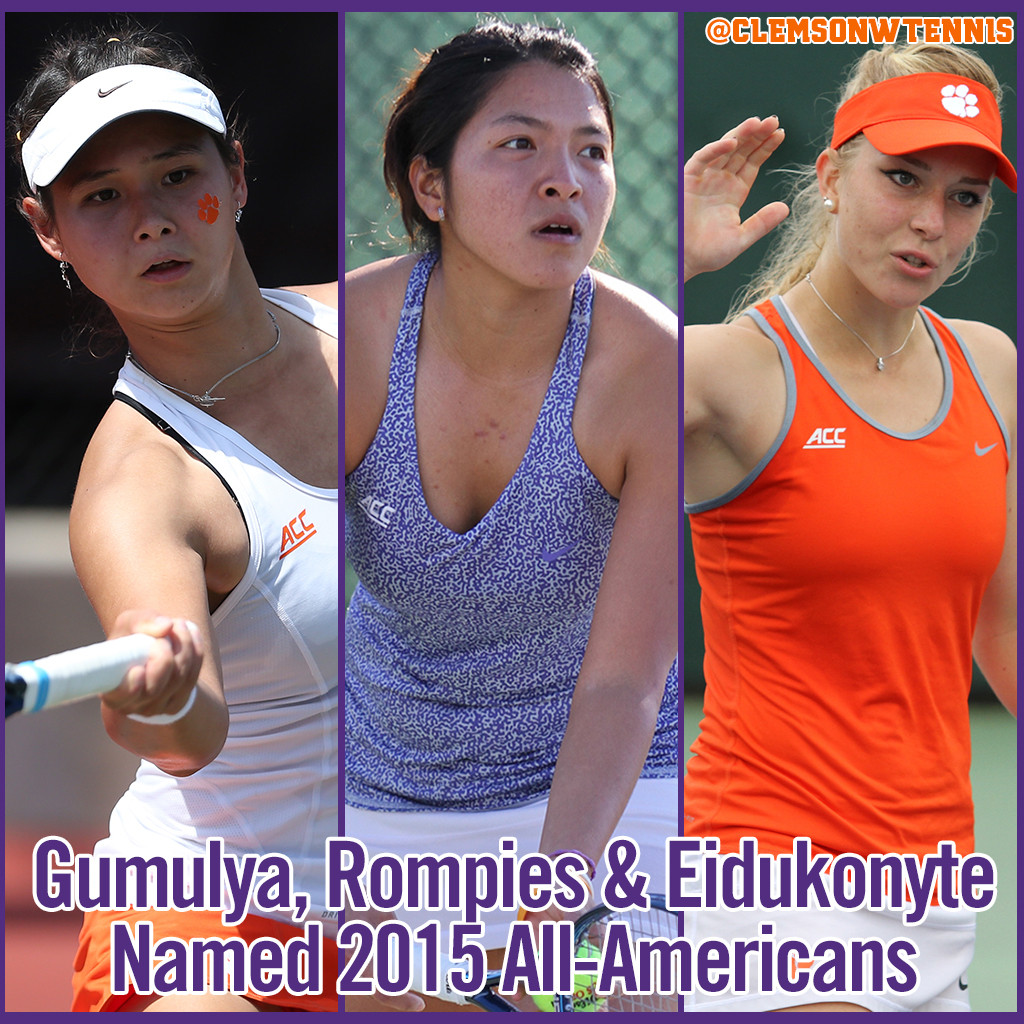 CLEMSON, S.C. – For just the third time in program history, and the first in six years, three members of the Clemson women’s tennis team earned All-America honors, as announced by the Intercollegiate Tennis Association on Thursday. Seniors Beatrice Gumulya and Jessy Rompies were named Doubles All-Americans, while junior Joana Eidukonyte earned the national honor in singles for the 2015 season.

Gumulya and Rompies earned the All-America distinction by virtue of their No. 4 ranking in the final national doubles poll, reaching the quarterfinals of the NCAA Doubles Championship and being the No. 4-national seed entering the NCAA doubles tournament. The pair finished the 2014-15 season with a 29-6 overall record, a 15-4 mark in dual matches and an 8-2 ledger in ACC play. They posted a 10-4 record against nationally-ranked doubles opponents, which included two wins over the nation’s top-ranked team, Alabama’s Jansen and Routliffe, who went on to win the NCAA Doubles Championship and finished the season with just four losses.

During the fall of 2014, the two seniors from Jakarta, Indonesia won the doubles title at the prestigious ITA All-American Championships in Pacific Palisades, Calif. and reached the semifinals of the ITA Indoor Championships in Flushing Meadows, N.Y. In the spring, the duo won 13-straight matches from Jan. 17 – March 7, and spent several weeks ranked as the number-one doubles team in the nation. Both were named to the All-ACC team in 2015, Gumulya to the Second Team and Rompies to the Third Team, and both earned their undergraduate degrees from Clemson in May of 2015.

Eidukonyte also qualified for All-America status in singles by meeting all three criteria. The junior from Vilnius, Lithuania was a 9-16-national seed entering the NCAA Singles Championship, advanced to the Round of 16 of the tournament and was ranked 16th in the nation in the ITA’s final singles poll. Eidukonyte concluded the 2014-15 season with a 37-7 overall record, 22-3 in dual matches and 12-2 in ACC singles play. The 37 wins put her in a tie for sixth place in Clemson record books in terms of single-season singles victories. Eidukonyte tallied 13 wins over top-100 ranked singles opponents, which included five wins over top-25 singles players. Her loss in the NCAA Round of 16 came to Jamie Loeb of North Carolina, who went on to win the national singles title. She was named to the All-ACC First Team earlier this spring.

This is just the third time in Clemson women’s tennis history, and the second time under Head Coach Nancy Harris, that the Tigers have had at least three players named All-Americans. Most recently, in 2009, four Tigers – Josipa Bek, Ina Hadziselimovic, Ani Mijacika and Keri Wong – earned the distinction.