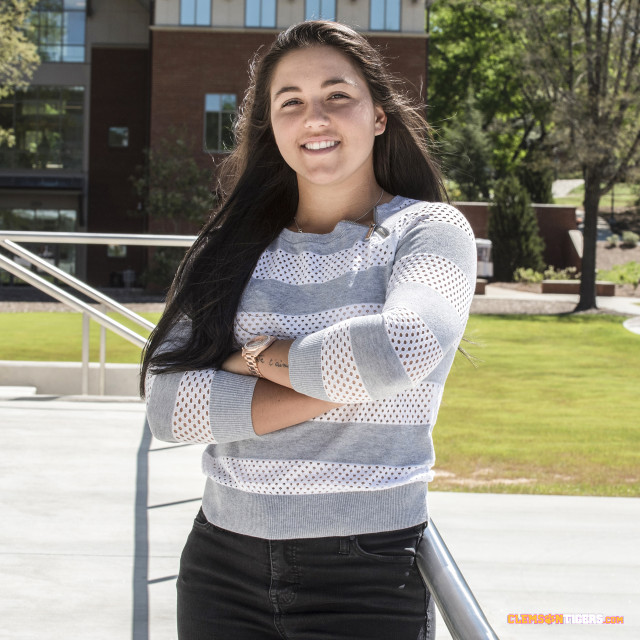 The Clemson family extends far and wide, even internationally. This is true for Marie-Alexandre Leduc, a junior women’s tennis player from Saguenay, Quebec. Leduc’s tennis career began at a young age, and she credits her aunt for getting her into the sport.

“My aunt played tennis, and when I was young, I just wanted to try a lot of different sports. Eventually, I played tennis for the first time, and just like that, I kept going.”

College was not always Leduc’s first choice. Like many athletes, she wanted to try to reach the professional ranks, but was unsure if she would go pro or go to college first. However, Leduc credits her visit to Clemson as her decision-maker.

“I was really late (coming to college), because I wasn’t sure if I even wanted to go to college or just try to go pro right away. I finally made the decision to visit a couple of schools and ended up visiting Clemson first. I really liked it, and that was it. My decision was made.”

Since coming to Clemson, Leduc has particularly enjoyed playing as a member of a team.

“Tennis players are really not used to playing as a team, because it’s usually such an individual sport. The team aspect about playing in college is so much fun, because it’s not just about you, it’s also about the whole team and competing all together.”

Leduc particularly enjoys a hard-fought team win just as much as a personal victory.

“I’ve had some good individual wins before, but I really like when we win as a team. I think that’s even better than just winning by yourself.”

Even though Leduc attends college far from home, the transition to college life in another country wasn’t too difficult. Notably, the facts that she already spoke English and she had already traveled a lot from a young age helped her. However, she does get homesick at times.

“I left my hometown when I was 11 to go train at Canada’s National Centre, so I was already used to being away from home. Even though I am used to it, I do still get homesick sometimes.”

Leduc’s career has not always been an easy path. In the fall of 2016, her father passed away, and it was a very difficult time for her. However, Leduc has been able to find motivation in her father’s passing.

“It was really hard at first. I had to go back home. It was so tough, but I think now it’s helping me. It’s another motivation for me to do the best I can all the time.”

Leduc shared a close relationship with her father, especially when it came to tennis.

“We were really close, especially in tennis. He would always come to tournaments with me. He was usually the one who took me everywhere.”

Leduc entered the spring 2017 season with many emotions and extra motivation.

“Last spring, my dad’s death was still fresh, but it has gotten easier, emotionally, for me to deal with it. I always think about giving all I can and everything that I have every time I step on the court for my dad.”

Leduc was able to turn those emotions into inspiration. Her play in the spring of 2017 led her to an All-ACC team selection, which provided her with even more motivation moving forward.

“It always feels good to experience some success. It gave me that much more motivation to be even better this year.”

Leduc provided some advice for anyone who may be in a similar situation of losing a loved one.

“Understand that that person is always going to be with you, even if they’re not there physically, and know that they would be proud of you.”

Leduc has certainly achieved many successes for her father to be proud of. Not only did she receive the All-ACC award in the spring of 2017, she finished the year with an 18-13 overall record and a 9-5 record in ACC matches, all the while playing against some of the best opponents in the nation, as she moved up to the No. 1 spot in the Tiger singles lineup midway through the season.

She saw additional success in the fall, advancing to the quarterfinals of the prestigious Oracle ITA National Championships, finishing the tournament season with a 9-3 record and wins over five nationally-ranked players, and earning a singles ranking of No. 20 in the nation entering the 2018 spring campaign.

“There was a lot of pressure when they were choosing players for the national team. I was always kind of on the line between being in and not being in. I won six national championships, and when they told me I was on the team, I was so happy.”

Leduc’s success in tournaments as well as her time on the national team helped prepare her for competing at Clemson.

“I learned how to play with pressure. In college, there are times when you may be the last one on the court and it’s up to you to win and clinch the match for the team. It can be tough. My experiences before I came to college, traveling and playing in tennis tournaments around the world, really helped me prepare for this level.”

Even with high levels of talent, there is always room for improvement. Leduc has noticed improvements in her play since she arrived in Clemson, particularly with finishing and serving.

“I’m a better all-around player now. In terms of finishing points, and also my serve, I’ve improved a lot, and it has made a big difference in my play.”

Leduc is confident and excited about the rest of the season, especially after a strong start.

“I’m really excited because we’ve had a very good start to the spring. Even in the fall, which is individual season, I had some good results. It gave me a lot of confidence, and I can’t wait to keep playing.”

Leduc is undecided on what path she’ll take after Clemson. The criminal justice major is still unsure about whether she will pursue a professional tennis career, much like when she decided to come to Clemson.

“I don’t know if I’ll want to go pro. I’m still looking at and thinking about my options. Of course a lot will depend on how I do on the court this year and next year. That will certainly help with my decision.”

One thing is for sure…Leduc has accomplished a lot, even with difficult hardship, so the future certainly looks bright for this Tiger.