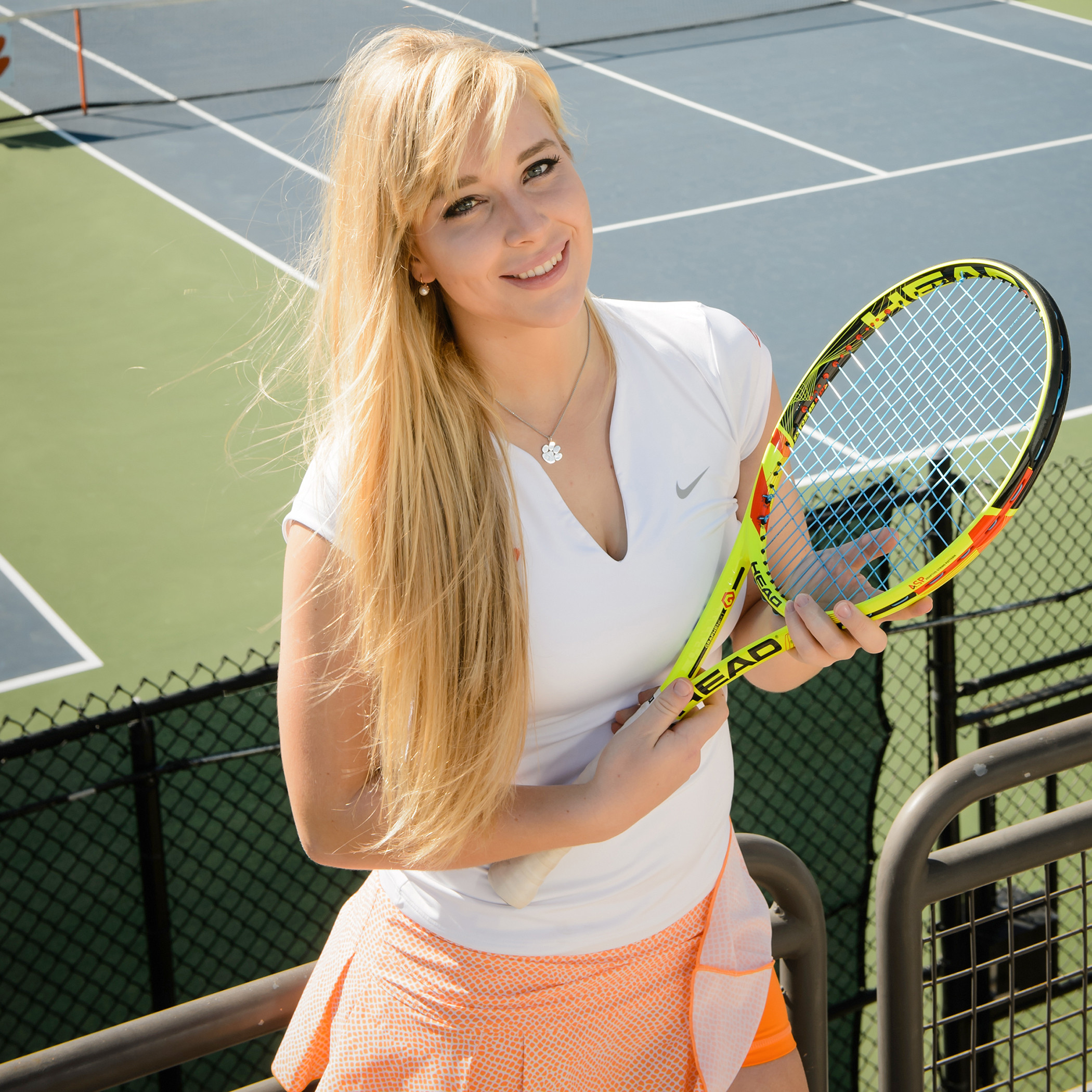 Not Your Average Jo

Four-thousand, nine-hundred, forty miles. That is how far Joana Eidukonyte traveled to continue her craft. She had never been to the United States until she stepped off a plane three years ago in Washington D.C.

“I got off the plane in Washington D.C., and I saw this huge line for customs,” she said. “My other plane was in two hours and the line had already taken an hour and a half!

“I had to run through the airport. I don’t know how I made it, but that is how my journey to Clemson began.”

Before she even had a plane to step off of, Eidukonyte had to decide if studying abroad for four years was something she wanted to do or was even a possibility. Originally from Vilnius, Lithuania, Clemson was a far cry from what she had grown up knowing.

“I used to get messages asking me if I wanted to come study abroad from other universities, but I wasn’t sure if they were real,” she said. “I was so suspicious about them. I was unsure if I wanted to go to the university back home, and I had never considered the possibility of studying in the USA. Then coach Scott Kidd came and started talking about Clemson University and asked if I would be interested in playing there.”

Eidukonyte decided to take an official visit to Clemson, and from that moment on, she was hooked.

“When I got to Clemson, I was in awe of everything they were showing me. The campus seemed so big, especially the football stadium. Then I met coach Nancy (Harris) and had dinner with the rest of the team.”

During the team dinner, Eidukonyte made up her mind about the next four years of her life.

“I said ‘yes’ and committed right at dinner, because I had a really good experience and wanted to stay at Clemson. I didn’t even want to visit other universities. Clemson was a perfect fit for me.”

Once she arrived on campus, Eidukonyte had a lot to learn so that she could assimilate with her American classmates. But with her outgoing nature and the culture of Clemson, she had no problem finding her way with a little help from her new family.

“The Clemson family is a real thing,” admitted Eidukonyte. “When I first arrived, if I needed something or didn’t understand something, I didn’t feel uncomfortable asking anyone. Clemson is great for international students.”

One experience Eidukonyte couldn’t have prepared herself for was the culture of Clemson football.

“The first time I saw a football game here I was so confused, because in Lithuania, ‘football’ means soccer. My first game was my freshman year versus Georgia, and we beat them. That was the best game ever because that was the first game of my life and a great memory.”

A factor that played a part in Eidukonyte’s decision to come to Clemson was the climate of South Carolina. With her home in Lithuania having four distinct seasons, she was drawn to the warm weather for one major reason…more practice time outside.

“I was talking with my family about the decision to come to Clemson to study abroad because it is a big deal to leave for four years. But the climate played a part in my decision because it was warm enough to practice all year round.”

She also loved the idea of having 20 free courts to practice on.

“The courts were hard to use at home because there are so few…you have to pay a lot of money for them. But at Clemson, we have 20 free courts you can hop on any time.”

Being away from home has not fazed Eidukonyte, because she has been able to surround herself with teammates experiencing the same change.

“My team is very much international. We have girls from Canada, Bolivia, Mexico, etc. I didn’t feel homesick at all.”

One teammate in particular helped Eidukonyte find her place in her first year abroad.

“It was kind of hard at first because I had so many new responsibilities and I was learning a new culture. But Carola (Pederzani), my old teammate, helped me out a lot with everything. She was always there when I needed her.”

Pederzani was not the only teammate who made an impact on Eidukonyte. Her entire team has given her fond memories and great experiences.

“All my teammates have been really nice and have helped me feel included. Now as a senior, I try and be that person for the younger girls on the team.”

Eidukonyte’s experience has taken her far beyond the courts of Clemson, allowing her to tour all over the United States.

“I’ve been to Las Vegas, the Grand Canyon and California to see Hollywood, to New York and Texas. I made it clear that I wanted to participate in any tournament I could while I was in college so I could travel.”

While extracurricular traveling excites Eidukonyte, one of her favorite things about Clemson has been her major – parks, recreation & tourism management.

“I love the PRTM professors. They are some of the nicest people I have ever met. They are really understanding and helpful if you are interested and active in class.”

Eidukonyte said she loves how the professors at Clemson have allowed her to grow as a student while also pursuing her passion of tennis.

“The professors want the different perspectives of international students. They want our insight on the topics we study. I love talking during class, so it is a lot of fun for me.”

Eidukonyte sees evidence of southern hospitality on a daily basis. This same hospitality is the biggest difference she sees between Clemson and her home in Lithuania.

“At Clemson, you go for a jog in the morning and say hello to everyone. But when I returned home after my freshman year, I was running and I said ‘hi’ to the other people running. They just looked at me with a stare like ‘What is this person doing?’”

Eidukonyte cannot believe her time at Clemson is almost over.

“My time here has gone by so fast. It has become this huge part of my life, and now it is almost over and time for me to graduate.”

After graduation, one of Clemson’s most decorated players in recent memory will turn her attention toward another objective.

“After Clemson, I will try to play professionally,” she said. “If that doesn’t turn out well, I will try and come back to Clemson and work as a graduate assistant while I get my master’s degree. I would love to do kinesiotherapy.”

Eidukonyte is eager to give back to the university that has given her so much, but the 2015 singles All-American hopes it follows a successful professional career.