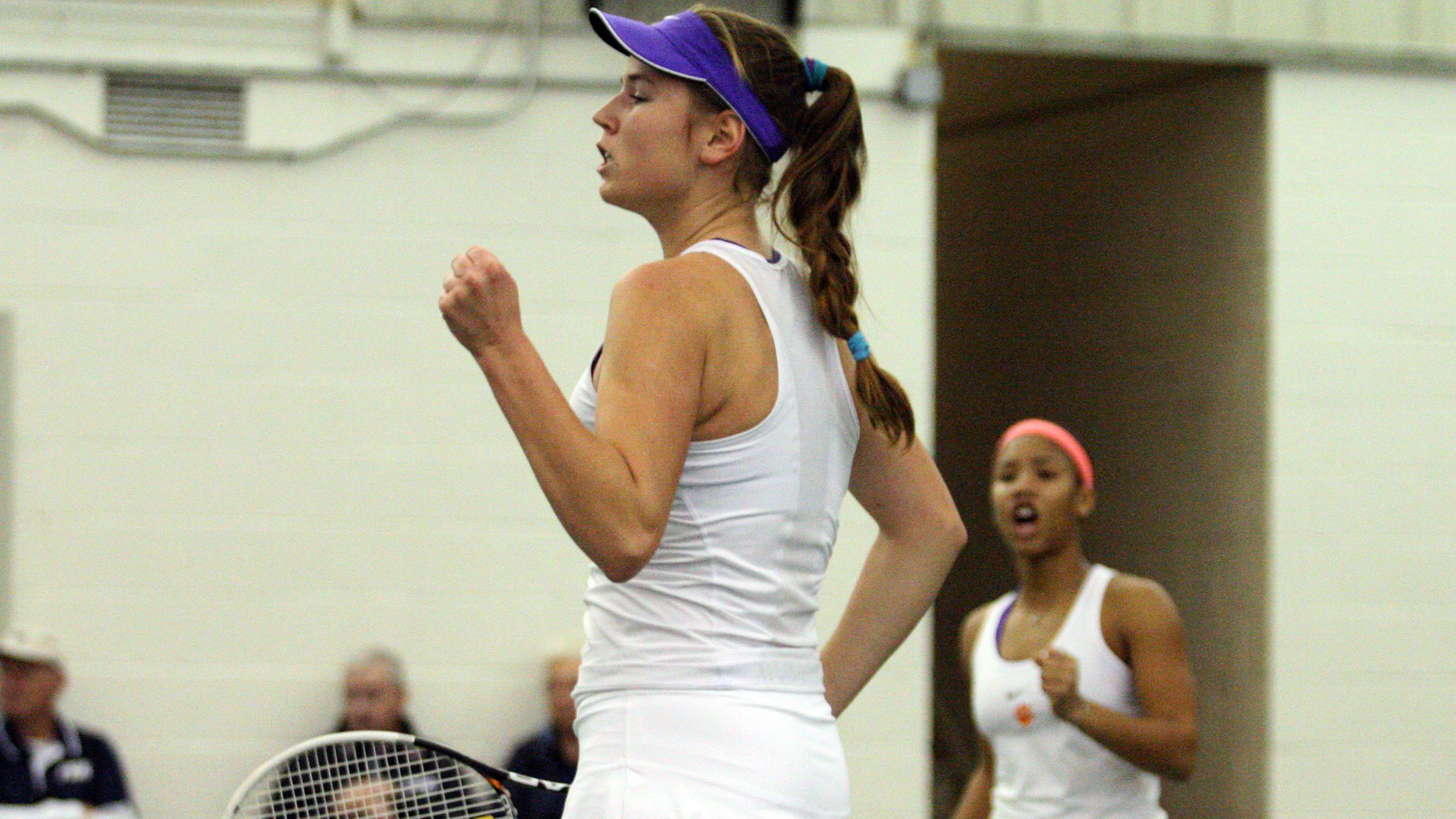 No Slump in this Sophomore

CLEMSON, SC – Yana Koroleva had a busy week. She and the 17th-ranked women’s tennis team returned from a four-day, two-city trip to Florida on March 3, playing two matches against top-20 foes. Koroleva won both of her matches on court one and was named ACC Player-of-the-Week for her efforts.

After going through her weekly grueling routine of classes and practice, Koroleva and the Tigers defeated Baylor at the Hoke Sloan Tennis Center on Friday. Koroleva helped clinch the doubles point, and then topped the 12th-ranked player in the nation in straight sets, to lead Clemson to the 4-3 win.

This would have been a full week for anyone, but was just the start of the week for Koroleva, a sophomore from Russia.

Koroleva and the team were back on the courts again bright and early on Saturday morning. But this time, instead of playing against an opponent, they were participating in and leading a successful charity event, Tiger Tennis For Totes.

“I was thinking about this last year, that we need to do something to promote our sport,” said Koroleva. “We struggle with attendance, so I thought it would be great to have an event like that. Last year, we started talking about it, and we decided it would be a good idea, and decided to do a fundraiser, because we thought it may bring more people, and for a good cause.”

Koroleva spearheaded the event, in which she aimed to make tennis more accessible to both adults and students, while promoting a terrific cause, Tanner’s Totes.

Tanner’s Totes is an initiative created by former men’s basketball player, Tanner Smith. The organization, set up and run by Smith, garnered national attention last season with its goal “to reach and cheer preteen / teen patients undergoing long-term hospital care by providing them with a tote bag full of fun / quality items to cheer their days. (tannerstotes.com)”

“When I told Coach Harris my idea, she said all we needed to do was pick a charity, and that was a the first that came to mind, because I like basketball. Other than tennis, it is the first thing I will watch. I had heard about Tanner’s Totes last year before one of the games. He was also an athlete, so it is good to show that in the Clemson community, we support each other.”

The event had several moving parts, and Koroleva, along with members of the marketing staff, women’s tennis staff, and women’s tennis team, put together a unique program with several great causes.

“I got a lot of support from the team and from Nancy. We got some great support from marketing with the prizes and advertising. The team helped me by supporting the idea. They gave up their weekend, one of our few weekends off, and they all agreed to do it.”

In the morning, Koroleva and the ladies teamed up with adults for a “pro-am,” in which the players and adults played with an against one another in a round-robin format. They then players several games, including a serving target game, in giving away some great prizes, including a basketball signed by Brad Brownell, and a football signed by Dabo Swinney.

Koroleva opened the adult competition to accommodate 24 individuals, and nearly all of the spots were filled.

Then, she and the team helped to cheer on the men’s team, who took down UNC Wilmington in the early afternoon.

She and the team were then back at it, this time playing tennis with students. They played doubles together, and then several of the participants tried their hands in returning volunteer assistant coach Vic Sanakaipapi’s legendary serve (of which there was one successful return, which landed the young lady the Swinney football).

In all, the event hauled in more than $1,000, and checks are still coming in. All proceeds will go directly to Tanner’s Totes in helping to serve their mission.

Without the hard work and ideas of Koroleva and the many organizers, such a great event would simply not be possible. Koroleva took a tremendous initiative, and continues to embody the well-roundedness of a true student-athlete. She hopes to make this event an annual occurrence, and build each year.

“I think the whole team wants to do it again. I think next time we’d like to do it in the fall, and involve the men’s team to make it bigger and better, and raise more money.”