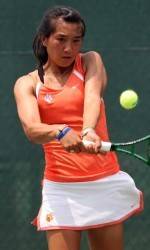 No. 9 Clemson Defeats College of Charleston in NCAA First Round

CLEMSON, SC – Ninth-seeded Clemson advanced to the NCAA Second Round for the ninth straight season with a 4-0 win over the College of Charleston on Friday in Clemson. The Cougars (20-10) started off quickly, leading in four of six singles matches, but Clemson’s (23-5) three All-ACC players saw to it that the Tigers hold strong.

“The girls played hard today,” said Nancy Harris, who improved to 18-10 in NCAA Tournament matches. “I am very happy for them and happy to get them out of the sun. It was a cooker today. We needed a tough match like this today. We gave a great effort today and hopefully we come out very fired up tomorrow against a good Georgia team.”

The Tigers advance to play Georgia (13-8), who defeated Harvard 4-0 earlier in the day. Clemson and Georgia will get underway Saturday at 1:00 pm at the Hoke Sloan Tennis Center for the right to go to Athens for the Sweet 16.

All-ACC performers Ina Hadziselimovic combined for all of Clemson’s five counting victories on the day.

In doubles, Bek and Hadziselimovic, ranked 7th nationally, quickly took down #37 Holly Dowse and Emma Hayman, who earned a spot in the NCAA doubles championship. Clemson’s duo won 8-2 over the Cougars, extending their win streak to 12 matches. They will have a tough match with Georgia, as Bulldogs Nadja Gilchrist and Chelsey Gullickson rank 8th nationally.

Laurianne Henry moved to 8-3 together on the season, clinching the doubles point with a 8-4 win against Newman and Viana at flight two. the freshman tandem of Caroline Magnusson led 7-4 and had deuce for the match when play was stopped due to the clinched point.

Clemson moved to 18-1 on the season when winning the doubles point, and 20-1 all time against the Cougars.

College of Charleston was not ready to go down quickly, as they jumped out to leads on courts one, three, four, and six.

“It’s tough to always start at a high level,” said Bek. “When you play great competition it is always a tough match. She hit some good shots at the beginning, but I tried to play my game and hoped that it would overcome her game in the beginning.”

Ina Hadziselimovic fell behind 2-1 early, but was able to wear Caroline Newman down, winning 6-2, 6-3 at flight three, clinching the match for the Tigers.

Laurianne Henry each won their first sets 7-5, and Henry led 4-1 in the second before the match was called with the clinching point in the books.