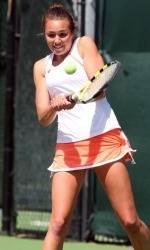 ***Update: With the threat of inclement weather scheduled to hit Saturday morning, the women’s tennis match between No. 12 Clemson and No. 17 Virginia has been moved to 1:00 pm. The match was originally scheduled for 11:00 am, but forecasts call for rain until roughly noon. Please visit ClemsonTigers.com for most up-to-date information on the match.***

The match is key for seeding of the ACC Tournament, as Clemson and Virginia are tied with Florida State (who plays No. 4 UNC Friday and No. 3 Duke on Sunday) at 5-4 in conference play for the four-seed. The top four seeds receive first-round byes in the ACC Tournament, held in Cary, NC from April 21-24.

In the event of inclement weather, the matches will be moved to the Indoor Tennis Center adjacent to the main courts.

Live scoring is available at ClemsonTigers.com for both matches.

Henry will go down in the Clemson record books as one of the most clutch players in school history. In her four years at Clemson, the Tigers have finished no worse than 12th in the nation in the final polls, and have advanced to three NCAA Sweet 16s. She won all three of her matches at flight six during Clemson’s 2008 ACC Championship run.

Henry posted a win as the clinching match in all three of her previous seasons in the NCAA Second round, and has a 47-38 all-time record in singles and a 30-24 mark in doubles. Henry will graduate with a degree in Communications.

Junior Josipa Bek has anchored Clemson at the top of the lineup in 2011, and moved up to a season-best ninth in this week’s singles poll. She is one of seven players nationally to be ranked in the top ten in both singles and doubles, as she and Keri Wong are ranked 3rd nationally after holding the nation’s top spot for four consecutive weeks. The tandem is 27-7 together, just two wins shy of the school’s doubles team single-season wins list.

With two doubles wins this weekend, Bek can tie former teammate Ina Hadziselimovic’s single season school record of 35 wins from the 2010 season, 25 of which came with Bek as the pair earned All-America honors. Bek would also earn her 90th career doubles win, tying her with former All-American Julie Coin for seventh on the all-time career doubles wins list.

Wong is ranked 50th this week, and won both of her matches at flight two against top-five teams Duke and North Carolina last weekend. Freshman Klara Vyskocilova is ranked 119th overall in singles this week as well.

Clemson defeated Virginia twice in 2010, the last match in the regular season and the quarterfinals of the ACC Tournament. Clemson holds a 33-4 mark against eh Cavliers all-time and a 16-1 mark in Clemson.

Virginia Tech is led by Yasmin Hamza, who holds a No. 78 national ranking in singles and No. 45 in doubles with Holly Johnson. Clemson is 11-3 against the Hokies all-time and 8-1 at home.