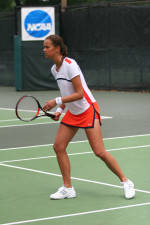 CATHEDRAL CITY, CA – The Clemson women’s tennis team completed the first day of action at the 2007 Duals In The Desert. Four Tigers posted victories in singles play at the tournament, which is being held at the Moore Tennis Academy at the Desert Princess Resort in Cathedral City, CA.

Second-round action in both singles and doubles competition will begin on Saturday morning.

Federica van Adrichem posted an impressive upset of 18th-ranked Tracy Lin of UCLA in the flight one bracket. The Tiger junior won the first set, 6-4, before falling by a 6-2 margin in the second. Van Adrichem then defeated Lin in the third frame, 6-4, for the victory.

Two Tigers had successful days at the number-three bracket. Estefania Balda defeated Fresno State’s Vanessa Heroux in straight sets (6-1, 6-0), while Laurianne Henry rebounded from a first-set loss to post the win over #81 Ashley Joelson of UCLA. Joelson claimed the first frame, 6-3, before Henry edged the Bruin player, 7-5, in set number two and then blanked her in the third, 6-0.

At flight two, Ina Hadziselimovic fell to #28 Yasmin Schnack of UCLA (6-1, 6-2), while Kathryn Gerber suffered a loss to Southern California’s Cristala Andrews at flight four (6-0, 6-3). Samantha Eppelsheimer was then defeated by Abby Liu of Texas, 6-2, 6-1.

The Tigers did not fair as well in doubles competition as all three teams dropped their opening round matches. Hadziselimovic and Luc fell to 33rd-ranked Lindsey Nelson and Maria Sanchez at flight one, 8-5. Van Adrichem then paired with Carol Salge at flight two and suffered an 8-2 loss to Lumpkin and Wetmore of UCLA. The Bruin tandem of Lin and Schnack edged Clemson’s team of Henry and Balda in the flight two bracket as well (9-7).