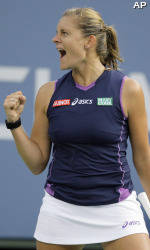 CLEMSON, SC – Former Clemson women’s tennis standout Julie Coin will be making her second career appearance in a Grand Slam event next week as she begins play at the 2009 Australian Open. Coin made tennis history in her Grand Slam debut last August as she upset top-seeded and world #1 Ana Ivanovic in the second round of the US Open.

Coin will face Russia’s Elena Vesnina in her opening match in Melbourne, Australia. The native of Amiens, France is currently 92nd in the Sony Ericsson WTA Tour Rankings.

She had a 3-2 record at the Brisbane tournament in Australia earlier this month for her only 2009 action. Coin advanced to the quarterfinals of the qualifying tournament before falling in a three-set match to number-one seed Anna Lena Groenefeld of Germany. However, she still advanced to the main draw of the tournament where she upset 71st-ranked Yanina Wickmayer (7-5, 6-7(5), 7-6(3)) in the opening round. Coin then narrowly dropped her second-round match to fellow Frenchwoman Amelie Mauresmo, who also knocked her out of the 2008 US Open, in a third-set tie break (5-7, 6-2, 7-6(11)).

Coin led Clemson to back-to-back NCAA Final Four appearances in 2004 and 2005 and reached the semifinals of the NCAA Singles Championships in 2004. She was ranked as high as #2 in the ITA Tennis poll during the 2005 season and earned All-America status three times over her career. The native of Amiens, France also helped the Tigers claim the 2004 ACC Championship and was named the conference Player-of-the-Year that season.