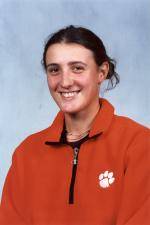 CLEMSON, SC – The Clemson women’s tennis team completed the first day of singles competition in the Clemson Fall Invitational on Saturday at the A. Hoke Sloan Tennis Center. All eight of Clemson’s players won their first round matches to reach the semi-final round, and five Tigers will be competing for their respective flight championships on Sunday.

At flight one singles, Tiger sophomore Julie Coin defeated Troy State’s Luisa Lopez by a score of 6-4, 6-2 in the first round. Coin won her semi-final match against Carolina Ramirez of Auburn, 6-0, 6-0, to reach Sunday’s flight one championship match.

Clemson’s Ioana Paun was victorious in the first round of the flight two singles draw over Air Force’s Heather Shelby, 6-2, 6-0, before falling to Georgia State’s Anna Breiholtz in three sets, 3-6, 6-1, 6-3, in the semi-final match.

At number three singles, Tiger senior Ana Stiglic defeated Marianna Melo of Troy State (6-7(2), 6-3, 6-1) in the first round, and Furman’s Shellie Cochran (6-3, 6-1) in the semi-finals. Also at flight three, Laurence Jayet of Clemson won her first round match by a score of 6-1, 6-0 over Renata Barreto of Winthrop, before dropping her second match to Auburn’s Isabel Rosenbrock in three sets (4-6, 6-3, 6-3).

Tiger junior Anna Dolinska defeated Georgia State’s Rebecca Mitchell by a score of 6-3, 6-2 in the first round at number four singles. Dolinska was victorious over Auburn’s Sarah Suitor (7-6(11-9), 6-3) in the semi-final matchup.

Richele LeSaldo of Clemson won her first round match on Saturday by default, and defeated Shannon Moore of Furman by a score of 6-4, 6-3 in the semi-finals of the number five singles draw.

The Tigers’ Sunnie Harmon reached Sunday’s flight six singles championship via wins over Troy State’s Leslie Garmon (6-2, 6-3) and Air Force’s Miclynn Crail (6-1, 6-0). Also at flight six, Clemson’s Ashlea Bowen won her first round match over Mariko Esannson of Air Force by a score of 6-0, 6-1, before falling to Furman’s Caroline Bentley in the semi-finals by a score of 6-5, 6-1.

The Tigers will compete in the final day of singles competition of the Clemson Fall Invitational on Sunday morning at the A. Hoke Sloan Tennis Center in Clemson. Matches for flights four through six are slated to begin at 9:00 AM, with flights one through three to follow at 10:30 AM.