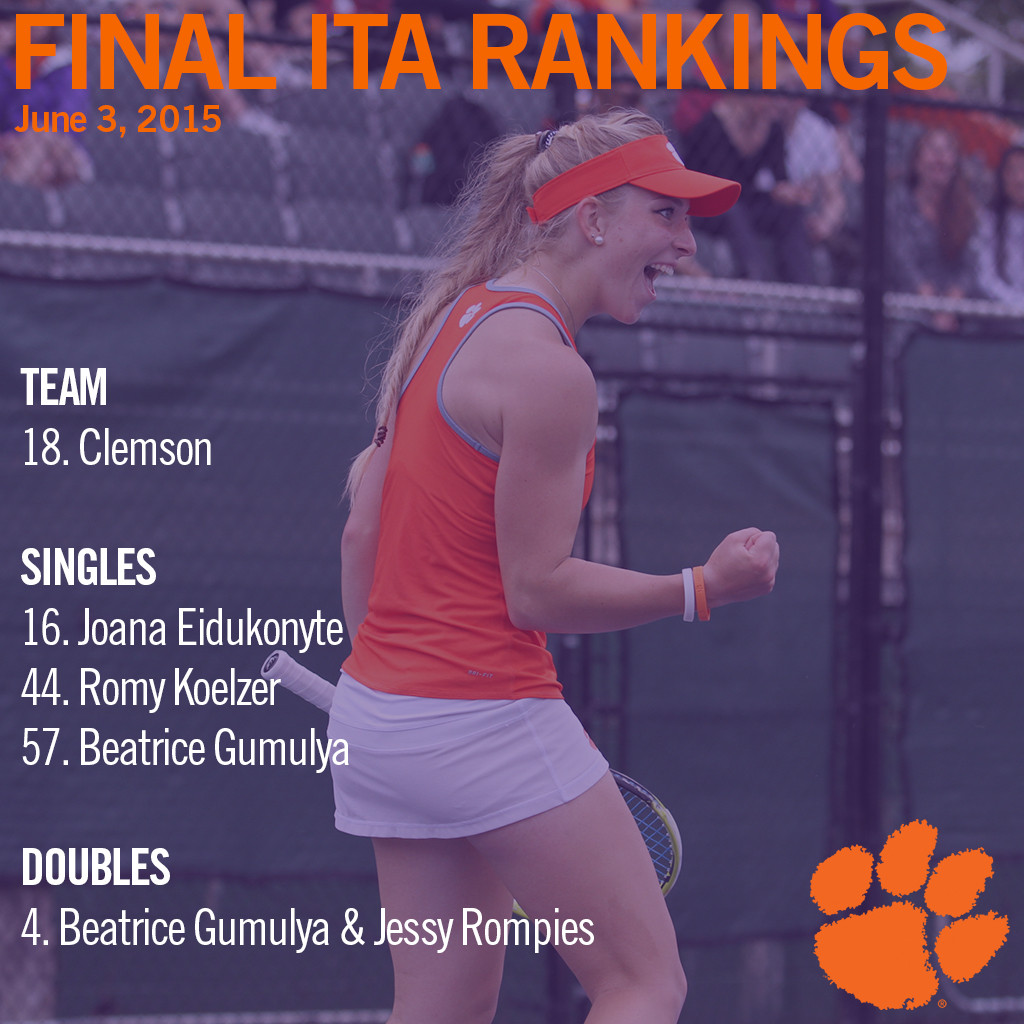 Junior Joana Eidukonyte was Clemson’s highest ranked singles player at No. 16. The First-Team All-ACC selection advanced to the Round of 16 in the NCAA Tournament before falling to eventual individual champion Jamie Loeb of UNC. Eidukonyte finished the season 37-7 and tied for sixth in Clemson history for most singles wins in a season. She ended the season with 13 wins over top-100 singles opponents, including five wins over top-25 players.

Senior Romy Koelzer, also a First-Team All-ACC member, came in at No. 44 after playing in the top spot for most of the season. Koelzer was also an NCAA singles participant, falling in the first round to Sophie Watts of Fresno State.  Beatrice Gumulya, also a senior and All-ACC Second Team member, finished the year ranked 57th.  The native of Jakarta, Indonesia won her first round match in the NCAA tournament, but fell in the second round. She concluded the season 29-10 overall, 19-6 in dual matches and 11-3 in ACC play.

Gumulya and partner Jessy Rompies, both All-American selections after reaching the NCAA Quarterfinals, finished the season ranked fourth nationally in doubles. Thanks to a 29-6 overall record, the duo earned the highest final season ranking by a Clemson doubles team since Keri Wong and Josipa Bek were ranked No. 3 at the conclusion of the 2011 season. The pair had 10 wins over top-50 doubles teams, including two over Jansen and Routliffe of Alabama, the eventual doubles national champions who only lost four times all season.

On May 26, Clemson finished the season ranked 18th as a team, the 12th time in the past 13 seasons the

team finished the season ranked among the top-20 nationally in the final ITA poll. The Tigers, who advanced to the NCAA Sweet 16 for the 10th time in the last 12 seasons, went 18-10 on the year with all 10 of the team’s losses coming to top-25 opponents.