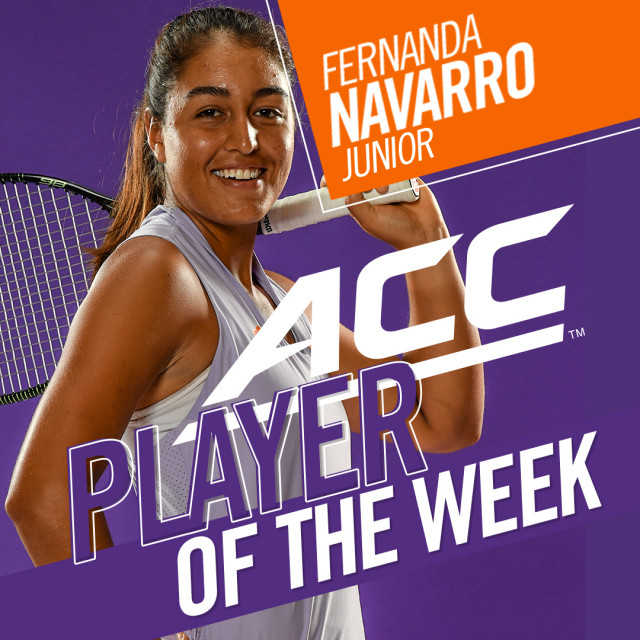 CLEMSON, S.C. – Two days after clinching the Clemson women’s tennis team’s 4-3 upset over 11th-ranked Wake Forest, Fernanda Navarro has been recognized by the Atlantic Coast Conference, as the recipient of the ACC Player of the Week award. It is the first career conference player of the week accolade for the junior from Guadalajara, Mexico, and the first for a Tiger tennis player this season.

Navarro was undefeated in singles and doubles play in two home matches on Feb. 18, helping Clemson to a 4-3 win over No. 11 Wake Forest and a 6-1 win over Chattanooga. Against the Demon Deacons, with the team score tied at 3-3, the match came down to Navarro’s point at No. 2 singles. Navarro battled for three sets, ultimately upsetting 80th-ranked Eliza Omirou (6-7(4), 6-4, 6-4) to clinch the victory for the Tigers. For her second match of the day, Navarro moved up to No. 1 singles and recorded a 6-1, 7-6(3) win over Samantha Caswell of Chattanooga.

Navarro was equally as successful in doubles play, as she and teammate Marie-Alexandre Leduc combined to upset the Demon Deacons’ 34th-ranked duo of Omirou and Ulyashchenko, 7-5, at No. 1 doubles. Later in the day, Navarro and Constanza Gorches recorded a 6-1 win against the Mocs, also at the No. 1 doubles position.