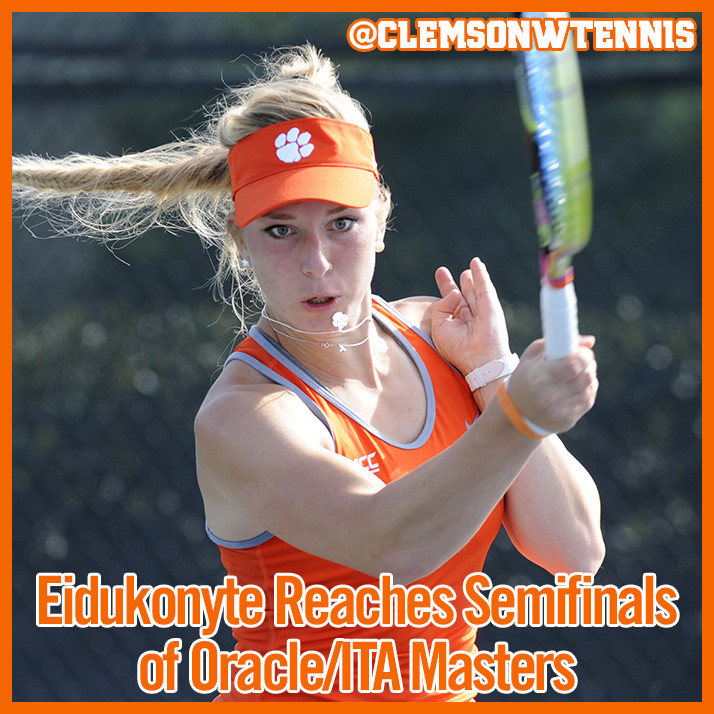 MALIBU, Calif. – Senior women’s tennis player Joana Eidukonyte reached the semifinals of the singles draw at the inaugural Oracle/ITA Masters at the Malibu Racquet Club on Saturday in Malibu, Calif. The native of Vilnius, Lithuania, ranked 11th nationally according to the ITA preseason poll released Sept. 15, defeated the No. 12 and No. 16 singles players in the nation before falling to the No. 9-ranked player in the semifinal round.

In the first round of the draw on Friday, Sept. 18, Eidukonyte defeated 16th-ranked Klara Fabikova of Cal in three sets, 6-4, 6-7(3), 6-2. In her first of two matches on Saturday, Eidukonyte downed No. 12 Viktoriya Lushkova of Oklahoma State, 7-5, 6-4 in the quarterfinals, before falling to No. 9 Hayley Carter of North Carolina, 6-2, 6-4 in the semifinals later in the day.

Eidukonyte and Carter were two of three women’s singles players from the ACC to reach the semifinals of the ITA Masters. Virginia’s Danielle Collins also won her semifinal match, and squares off against Carter in Sunday’s final.

Eidukonyte returns to action on Oct. 8-11 when she heads out west again, this time to compete in the singles main draw at prestigious Riviera/ITA All-American in Pacific Palisades, Calif. The rest of the Clemson women’s tennis team will see its first action of the fall season on Sept. 25-27 at the Furman Fall Classic in Greenville, S.C.