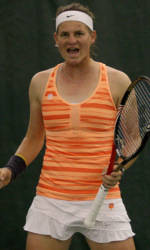 ATHENS, GA – Though her team lost 4-3 to No. 6 Georgia in the second round of the NCAA Tennis Tournament Saturday at the Dan Magil Tennis Complex in Athens, GA, Nancy Harris said watching Josipa Bek was like watching the final chapter of a fairy tale movie.

After falling behind 3-1 in the third and final set to Georgia’s Nadja Gilchrist at No. 2 singles, Bek rallied to win the final five games to take the match 4-6, 6-2, 6-3. The win allowed Bek, who fell one point shy in Friday’s win over Arizona State, to set Clemson’s all-time record for total victories at 224.

“The way Jo closed her final match, it’s like a fairy tale,” Harris said. “Her year was so challenging for her and to come in here and finish with the all-time wins (record), while putting us within reach of possibly winning the match and moving us on to the Sweet 16, that is something she always did for Clemson.

“She has always put us in position to win big things over her four years at Clemson. That’s the kind of player she is, and that is the kind of person she is. She was true to herself today.”

Bek isn’t one to boast about her accomplishments. She says she came to Clemson to help the Tigers win championships. Though she did not care about personal records, the senior owns a lot of them.

Besides her record for career wins, she also owns the record of most career three-set victories (32), most tiebreakers won (19), doubles victories (119), doubles wins in a season (40) and most double wins by a tandem in a one year (34). She also ranks in the top 10 all-time in five other categories.

The Tigers (16-10) nearly rallied to beat Georgia, who took a 3-0 lead after getting the doubles point and victories at flights one and two in the singles matches. But after Romi Kolzer defeated Lilly Kimbell 7-5, 7-5 in flight six, Bek rallied to win the third set. The senior was down a break, 3-1, in the final set, but broke back to tie the score at 3-3 and then took over the match with forehand winners and a couple of aces.

“That win for her was unbelievable,” Harris said. “I’m just so proud of her. I’m proud of the kind of person she is. She is the true meaning of a champion. A champion to me is not just a great tennis player, but it’s a person that embodies all those qualities. You know? Appreciation, grace, poise, spirit, fight, commitment and has a pure love for the game.

“She has all of those things.”

Bek’s career isn’t quite over at Clemson. She will join fellow senior and doubles teammate Keri Wong in the NCAA Doubles Tournament which will begin in Athens in two weeks. Last year, Bek and Wong teamed up to advance to the NCAA Finals.

“I will try to represent Clemson the best that I can for a few more matches with Keri in the individuals,” Bek said. “I wish I could go back and play singles, but representing Clemson in the doubles is going to be fun. I look forward to it.”

And Clemson does too.