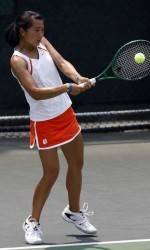 ATHENS, GA – Rising junior women’s tennis player Keri Wong defeated Viet Ha Ngo of Georgia Tech in the Finals of the ITA Southeast Summer Circuit tournament hosted by the University of Georgia. It is Wong’s third such title in as many weeks, after breezing through tournaments in Birmingham, AL and Tallahassee, FL.

Wong also captured the doubles portion of the tournament while playing with Ngo. Wong and Ngo played in the ACC Tournament in singles, and their match was the only one not to finish, as Wong led 5-7, 6-0, 2-0. In the finals of this tournament, she breezed by, winning 6-2, 6-0. She also defeated Lynn Blau of Georgia Tech and Alex Clay of Alabama on her way to the title.

The Georgia facility is familiar, as Wong and the Tigers played at UGA during the dual match season, and then played their Sweet 16 matchup there as well. Wong finished the 2010 season ranked #53 in the ITA Singles Poll. The final circuit tournament will be from July 23-26 at the University of Alabama.

Players compete in tournaments within their region with hopes of moving on to the ITA Summer National Tournament. The winner of that tournament will qualify for a wild card spot in the qualification rounds of the US Open.

So far, Wong has established herself as one of the top players nationally. She competed in a tournament held at Florida State from July 7-9, which she won handily, dropping only 11 total games in five matches, and defeating her doubles partner and sophomore at Marshall, Kara Kucin, 6-0, 6-1 in the finals.

She then traveled to Montgomery, AL, beginning play just a day after her win in Tallahassee. Wong played just as well, dropping only ten games as the tournament’s top-seeded player. She knocked out LSU commitment Alexus Coats, 6-0, 6-0 in the finals to win her second straight event.

The final circuit tournament will be from July 23-26 at the University of Alabama.