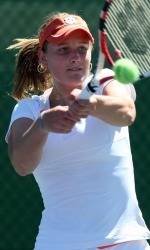 CLEMSON, SC – Nelly Ciolkowski had a remarkable 2011 tennis season, helping the women’s tennis team into the Sweet 16 of the NCAA National Team Championships for her second year in a row, and the team’s fifth consecutive season. Meanwhile, as she played a major role in helping the Clemson Women’s Tennis Team finish 14th in the Final Intercollegiate Tennis Association (ITA) Women’s National Team Rankings, Ciolkowski has yet to settle and celebrate such achievements.

Ciolkowski notched Clemson’s clinching point on Arkansas’ home court in the NCAA Second Round, and has won 52 matches in her first two seasons as a Tiger. After returning home in May, she has been making strides to improve her game.

The rising junior from Neuilly-Plaisance, France, just finished playing the French Universities Championships, a tennis tournament consisting of French-born tennis players who are currently attending different universities from around the world. Ciolkowski rose to the occasion and won the entire tournament less than a month after Clemson played its last team match. She won all three of her matches, as well as winning her final match in straight sets over Laura Rocchi of Paris, 6-4, 6-1.

The next destination for Clemson’s French Fireball is Shenzhen, China, on the outskirts on Hong Kong, where Ciolkowski will represent France and compete in the Summer 2011 World University Games. The event, which is held every two years, will take place Aug. 10-23. She will travel with five French tennis players as well as one or two French coaches. They will represent France as a team, with each point counting towards the team’s final score. The tournament consists of singles, doubles, and mixed doubles.

Ciolkowski has never traveled to China before, and says, “I wanted to win the tournament just to see what’s going on over there”.

As she will remember to pack her tennis rackets, her tennis shoes, string, and grips, there is one thing she is sure not to forget; her camera. “I am taking my camera, that’s for sure!” says Ciolkowski, who has taken to photography as one of her hobbies,

When asked how her game looks right now in comparison to the 2011 season, Ciolkowski explains that she is playing a lot more relaxed than during the season, for the simple reasons that school is done, and the stress is minimized.

“We hope to bring medals and good memories back home!” exclaims Ciolkowski.

“Woah Nelly” was spot on, and she is not holding back this summer.