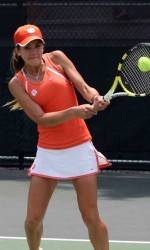 GREENSBORO, NC – Clemson senior women’s tennis player Ina Hadziselimovic has been named to the 2010 Women’s Tennis All-ACC Academic Team as announced by the league office on Wednesday. It is Hadziselimovic’s third career honor, as the PRTM major will graduate in August after completing her internship.

This season, she was 26-11 in singles play, including a 9-2 mark in ACC matches. She also had a 10-1 mark in doubles at the top flight, and spent most of the season within the top 10 nationally.

The Tigers reached a fourth straight Sweet 16, and the sixth in the last seven seasons in 2010. They posted a 24-6 overall mark, finishing third in the regular season and reaching the semifinals of the ACC Tournament. The Tigers knocked off seven top-25 opponents this season, including #4 Georgia and #7 Duke.