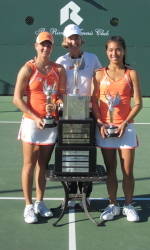 Clemson’s Bek, Wong Knock Off Nation’s No. 1 to Advance to Finals

FLUSHING, NY – Clemson’s fifth-ranked doubles team of Josipa Bek and Keri Wong have advanced to the finals of the USTA/ITA Indoor National Championships after knocking off the nation’s top-ranked doubles team on Saturday. Bek and Wong won, 6-3, 7-6 (5) over Jana Juricova and Mari Andersson of California in the semifinals.

“Our Tigers are a work in progress making us proud with every match,” said Head Coach Nancy Harris. “Today they faced one of their toughest opponents in the tournament – Cal-Berkley – and yesterday took out another great team in Southern Cal. Their opponents today could thread a needle putting the balls on their feet every time they came in. The Tigers prevailed with their aggression and courage to make big plays at big moments with telling success. I am so excited for Keri and Jo as they have earned their way to the finals against Florida tomorrow.”

The Tigers advance to play Sofie Oyen and Allie Will of Florida in the finals on Sunday. The Clemson duo has advanced to the finals in both major national tournaments this season.

The Tigers fell in the finals of the Riviera ITA All-American tournament in October and won the Carolina Regional to advance into this tournament, where they are the No. 3 overall seed.

Clemson’s duo is familiar with this Florida team, as they played in October in the first round of the ITA All-American Championships in Pacific Palisades, CA. The Tigers won, 8-6 on their way to reaching the finals. But the Florida team is playing well, as they knocked off this tournament’s top seed in Stanford’s Hilary Barte and Mallory Burdette in the first round. That duo from Stanford was the group that defeated Bek and Wong in the All-American Finals.

If the Tigers are able to come away with the title, they will have made a strong case to be the nation’s number-one team in the spring dual-match season.