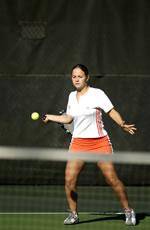 ATHENS, GA – The Clemson women’s tennis team defeated Texas A&M in the round of 16 at the NCAA Women’s Tennis Tournament on Thursday morning. The Tigers gained their 25th win of the year by a score of 4-1 over the Texas A&M Aggies to advance to the Elite Eight for the second time in program history. Clemson made its only other appearance in the round of eight in 1983, when only 16 teams made the national tournament. On Friday, Clemson will face the University of Washington in an 11:00 AM match at the Dan Magill Tennis Complex. The Tigers and the Huskies have never met on the tennis court. Washington enters Friday’s match with a 21-5 record while the Tigers sport a 25-3 overall mark.

“We are thrilled to be in the Elite Eight,” said Head Coach Nancy Harris. “We had to overcome a very good team today in Texas A&M and we have a lot of respect for the Aggie team and head coach Bobby Kleinecke. The Tigers fought hard and we are fortunate to come out ahead. All the teams here are very good and we are excited to have the opportunity to face another tough opponent in Washington.”

The Tigers captured the doubles point for the 25th time this season to lead 1-0 entering singles play. Clemson has only lost the doubles point three times this season. At flight one doubles, Maria Brito and Daniela Alvarez dropped an 8-1 decision to Texas A&M’s Jessica Roland and Lauren Walker. Richele LeSaldo and Karen Rombouts defeated Anna Lubinsky and Nicki Mechem by score of 8-3 at flight two doubles. Clemson’s Julie Coin and Alix Lacelarie secured the doubles point for the Tigers with an 8-3 victory over Roberta Spencer and Helga Vieira at flight two doubles. In postseason play (ACC Championships and NCAA Championships), Coin and Lacelarie are 4-0 with one unfinished match. LeSaldo and Rombouts have also been consistent for the Tigers, posting a 4-1 mark in postseason play.

In singles play, the Aggies evened the match score as Daniela Alvarez clinched the match for the Tigers, defeating the Aggies’ Helga Vieira by a score of 2-6, 6-3, 6-4. “I was pretty excited about winning”, said Alvarez. “It felt good to be the one to clinch the match especially after not finishing the last four matches.” Alvarez had not finished a match since the first round of the ACC Tournament, when she defeated Marianne Baker of Maryland.