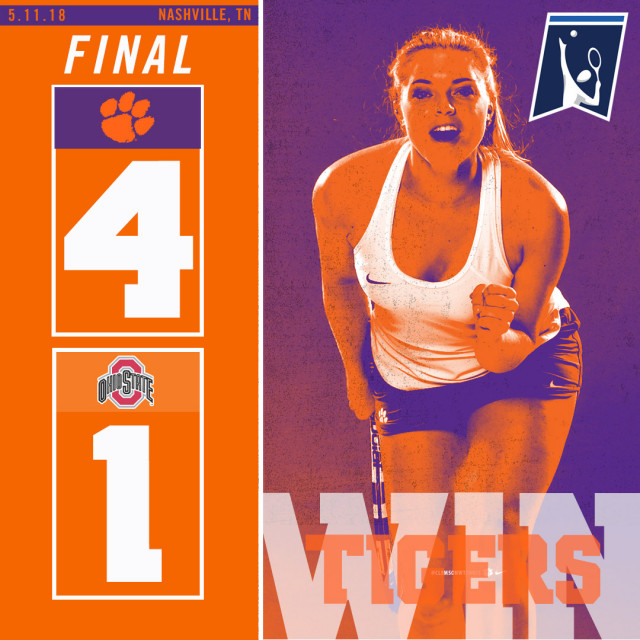 NASHVILLE, Tenn. – Clemson won the doubles point, and Tate Schroeder, Sydney Riley and Marie-Alexandre Leduc won their singles match, en route to the 41st-ranked Tigers’ 4-1 upset over 28th-ranked Ohio State (14-9) in the first round of the NCAA Championships in Nashville, Tenn. on Friday afternoon. With the win, Clemson (14-13) advances to the NCAA Second Round, and faces the winner of No. 1 overall seed Vanderbilt and Alabama State on May 12.

The Tigers started out quickly in doubles play, opening with leads at No. 2 and No. 3. At No. 2, Ally Miller-Krasilnikov and Tate Schoeder never let up, winning 6-2. At No. 3, Sydney Riley and Daniela Ruiz’s Buckeye opponents fought back, but the Clemson duo ultimately won 6-4 to claim the doubles point. It was the 14th time this season that the Tigers have won the doubles point.

Schroeder and Riley continued their momentum from doubles into singles play, as both won in straight sets. Schroeder defeated her Ohio state opponent 6-3, 6-2 at No. 3, and Riley downed hers 6-3, 6-3 at No. 4. The Buckeyes picked up their lone point at No. 5 singles, before Marie-Alexandre Leduc, ranked 24th nationally, clinched the win for the Tigers, winning 6-4, 7-6(3) at No. 1 singles over Ohio State’s 57th-ranked Anna Sanford.

With the win, the Tigers advance to the NCAA Second Round for the second year in a row and the 16th time in 17 seasons. Clemson will face the winner of Vanderbilt, the No. 1 overall seed in the NCAA tournament, and the No. 2 team in the nation, and Alabama State, who are scheduled to play this afternoon starting at 2 PM CT. The second-round match will be played on Saturday, May 12 at 12 PM CT (1 PM ET) at the Currey Tennis Center in Nashville.