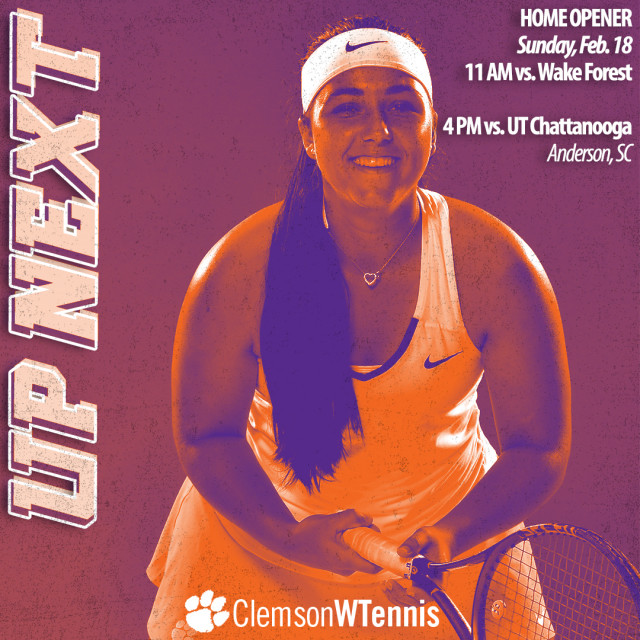 Who: Clemson vs. No. 11 Wake Forest/UT Chattanooga

– Clemson opened the season with two wins on Jan. 20 at the Duckworth Doubleheader, defeating Charleston Southern 7-0 and Appalachian State 4-0. The Tigers were a combined 9-0 in singles play and 5-0 in doubles play and did not lose a single set in the two matches.

– Clemson then traveled to Columbia for the ITA Kick-off Weekend and split two matches, defeating the University of Southern California for the first time in program history on Friday and falling to then-ranked No. 25 South Carolina in the championship on Saturday. The Tigers topped the Trojans 4-1 in a come-from-behind victory featuring multiple won tiebreaks in singles, but they lost 1-4 to the Gamecocks despite earning the doubles point.

– Daniela Ruiz is the lone senior on the team, and is the Tigers’ team captain for the second-straight season. Ruiz is 2-1 in dual singles matches at the No. 6 spot in the lineup so far this season and also played No. 5 against Georgia.

– Junior Marie-Alexandre Leduc is ranked 15th according to the ITA’s first spring singles rankings, released Feb. 7, 2018. Leduc is a perfect 3-0 in dual singles matches at No. 1 this spring, including a victory over the nation’s No. 35 player at the time, Gabby Smith of Southern Cal, that clinched the Tigers’ win over the Trojans.

– Sophomore Tate Schroeder and junior Sydney Riley have split time at the No. 2 and 3 singles spots this season. Schroeder has played five dual matches at No. 3 and has a 3-2 record in those matches, including a win over the nation’s No. 85 player at the time, Madison Westby of Southern Cal. She also played at the No. 2 spot against Georgia.

– Junior Fernanda Navarro is 2-0 in dual singles matches at No. 4 this season, and she also played against Georgia at No. 2 singles.

– Sophomore Constanza Gorches has played most of the Tigers’ matches at No. 5, and she is 2-2 in her dual matches so far.

– Junior Ally Miller-Krasilnikov and freshman Laura Marti both saw action in the Georgia match at No. 5 and No. 6 singles, respectively.

– Leduc and Navarro have played at the No. 1 doubles slot for the Tigers this season and have a 2-2 record in dual matches.

– Gorches and Riley make up the No. 2 doubles pair, and though they are 2-2 in dual matches, they boast a win over the nation’s then-ranked No. 33 pair at the time in South Carolina’s Hadley Berg and Rachel Rohrabacher in the ITA Kick-Off Championship.

– Schroeder has teamed up with Miller-Krasilnikov to form the Tigers’ No. 3 doubles team, and the two are 2-2 in dual matches this season. The two also played a match at No. 2 doubles against Georgia, but that match did not finish.

– In the Georgia match, Ruiz and Marti played at the No. 3 doubles slot, and the pair holds a 1-1 record in dual doubles matches.