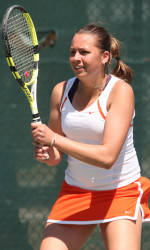 Every sports team has a player who, when his or her back is against the wall, performs at their best to help lead the team to victory. For Clemson women’s tennis, that player is senior Laurianne Henry.

The Anderson, SC native’s career record of 42-31 is not gaudy, but her penchant for clutch play is. The 2010 NCAA Tournament against Georgia was a prime example.

Clemson’s top player, Josipa Bek, was locked in a battle at #1 singles and headed to a third set with eventual singles National Champion Chelsey Gullickson in a toss-up match.

Both teams were battling temperatures in the 90s and Henry cramped up early. Earlier in the season, she clinched a come-from-behind win at #4 Georgia, and it would come down to her again, as #9 Clemson fought for its NCAA Tournament life.

Henry dropped the first set to Cameron Ellis, and it looked as if the match might swing in the Bulldogs’ favor. But Henry dug in and gutted out a 7-6 win in the second set (7-2 tiebreaker). She went on to a 6-2 win in the third set to win the match and send Clemson to the round of 16.

Just another day at the office for Henry, who won the clinching match in the second round of the NCAA Tournament for the third time in her three seasons.

“I have never thought about that,” admitted Henry. “I’ve never labeled myself. When it gets to pressure, I believe I can win. I do get nervous, but that helps me pull through. That’s how I’ve always been.”

Last season alone, she recorded the deciding point against three top-20 teams, but the then-junior’s win in the NCAA Tournament has stuck out above all others in her storied career.

“This year against Georgia was the most memorable because it was a third set and it was really close,” she added. “Thinking about it now, it was so up in the air and it brought our whole team to nationals.

“In the past few years, it was Michigan and North Carolina. As a freshman and sophomore, I didn’t really understand the situation. Now, I realize how important those matches are.”

Some clutch players explain how they find a “zone” when they play and that they do not see or hear anything, but rather they focus all of their energies on winning the next point. For a player who has been in the situation many times, Henry is either oblivious to, or numb to, the gravity of the situation when the team turns to her.

“I never pay attention to other scores (of teammates’ matches). I just don’t think about it. I play my match. The only time I know is if all the girls are lining up next to me and cheering. I always give 100 percent. When I actually am aware, I get a little nervous, but that helps me through.”

As a the only senior on the 2010-11 squad, Henry will no doubt be counted on for her leadership and clutch play this season. The Tigers are coming off a 24-6 season in which they advanced to the Sweet 16 for the fifth consecutive season and the seventh time in the last eight years. They return All-ACC selections Keri Wong and Bek, as well as the ITA Carolina Region Rookie Player-of-the-Year in Nelly Ciolkowski.

“I want to be the leader,” said Henry. “I believe I have good leadership skills. I’m not very vocal, but I believe I can help emotionally by staying positive. I can help create a family atmosphere.

“I think we can get past the round of 16, because our team has so much potential this year. We are bonding so well, and I think that is important for the team. You can have the best talent, but the chemistry is key.”

The battle-hardened Henry has fought injuries throughout her career. However, she has been a vital part of every big moment when it matters most. She has been able to reach new levels of personal training, and she is optimistic about the development of her game.

“I have worked out every day this summer,” stated Henry. “I did give myself a bit of a mental break. Right now, I feel good and our team is very fit. I’m always trying to be more aggressive and I am trying to work on my consistency along with working my way to the net. I feel really good about my game. However, there are always things to improve, but I believe I’m in a good position.”

Led by Henry, the Tigers have a fresh mindset for the new season and hope to return to the Final Four, as they did in 2004 and 2005. A fresh batch of freshmen added to the Tigers’ already stout lineup should mean big things for the team this season.

“Everything is so much more intense this year and at a whole new level,” explained the communication studies major. “Our goal is a National Championship, and we have player focused on that. The freshmen are all new at it and I don’t know if they understand what some of that means.”

It is all but certain that Henry will be there to show them.