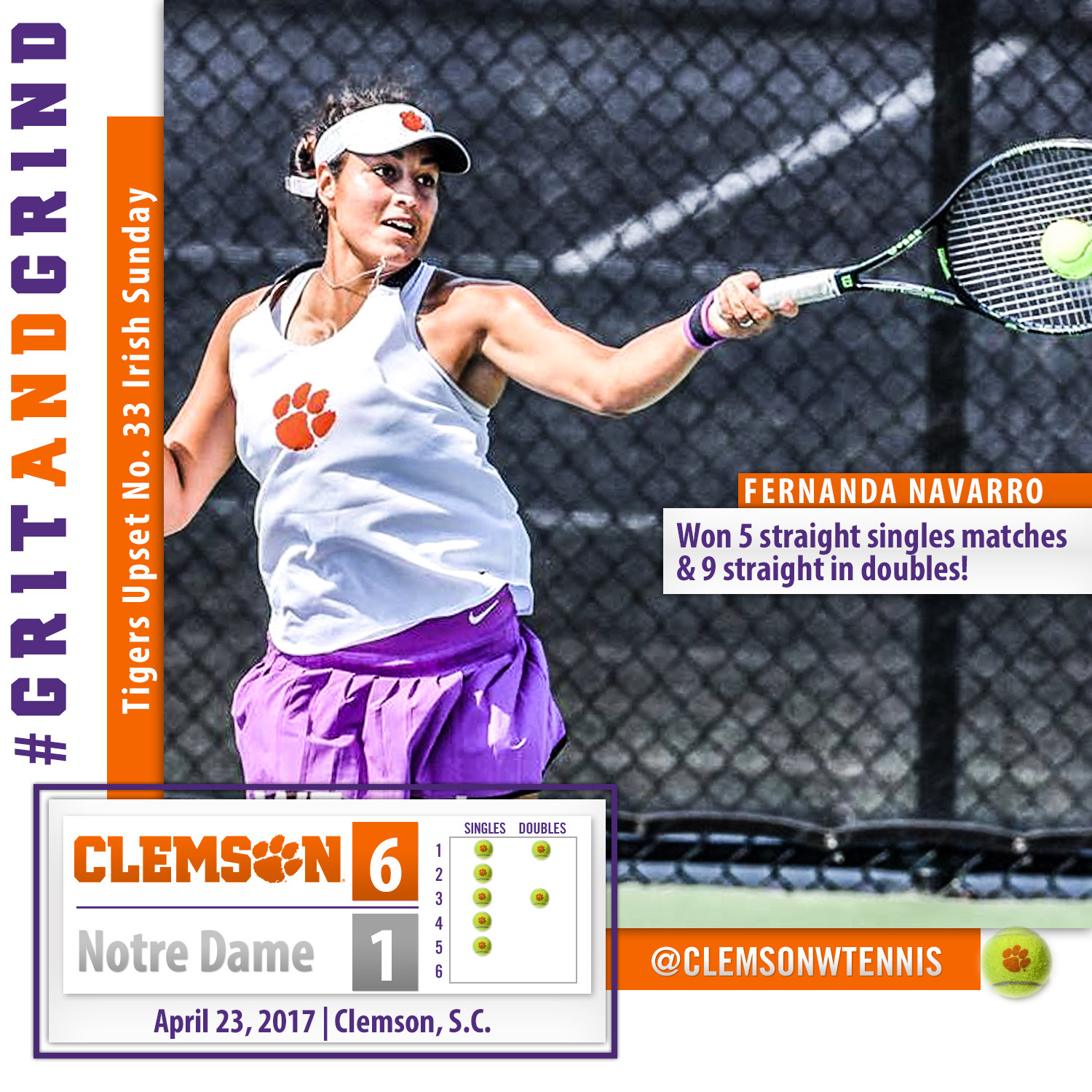 CLEMSON, S.C. – The Clemson women’s tennis team finished the regular season with a 6-1 upset over 33rd-ranked Notre Dame at the Clemson Indoor Tennis Center on Sunday afternoon. With the win, the Tigers, currently ranked 47th nationally, improved to 12-11 (7-7 ACC) heading into next week’s conference tournament, while the Irish fell to 16-8 (7-7 ACC) with the loss.

Clemson won the doubles point against the Irish with wins at No. 3 and No. 1, in that order. It was the sixth match in a row the Tigers have won the doubles point, the 16th time this season and the 11th time in ACC play. Sophomore Fernanda Navarro and junior Daniela Ruiz won first at No. 3 doubles, by a score of 6-2 over their Notre Dame opponent. As a doubles team, Navarro and Ruiz are 13-1 in dual matches, and finished ACC regular-season play with a 10-1 record. Sophomores Ayan Broomfield and Marie-Alexandre Leduc clinched the doubles point for Clemson with a 6-3 win on Court 1. The pair has a 19-4 overall record in doubles play, including 14-3 in dual matches and 10-2 in ACC play.

For the second-straight match, Navarro was the first singles player to finish her match, winning 6-3, 6-4 over her opponent on Court 3. Navarro has now won five consecutive singles matches. Freshman Sydney Riley gave the Tigers a 3-0 lead with a 7-5, 6-4 win over her Notre Dame opponent at No. 4 singles. Leduc then clinched the team victory for the Tigers, upsetting 80th-ranked Monica Robinson in three sets (6-3, 4-6, 6-2) at No. 1 singles. Broomfield and freshman Constanza Gorches finished off the match with wins at No. 2 and 5, respectively.

The Tigers travel to Rome, Ga., on the campus of Berry College, for the ACC Championships on April 26-30. Seeding and match dates and times will be announced by the Atlantic Coast Conference on Sunday evening.