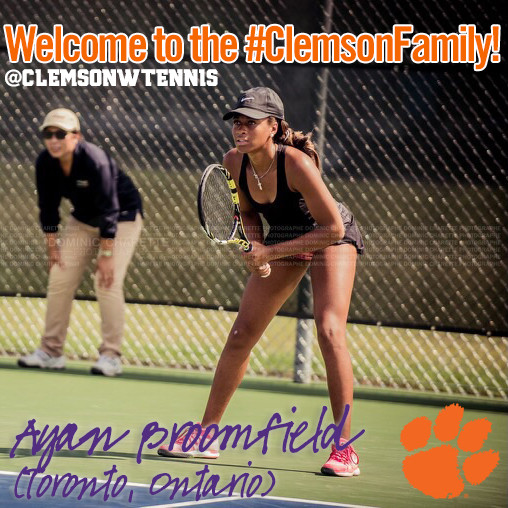 Broomfield to Join Tigers in January

CLEMSON, S.C. – Ayan Broomfield, a native of Toronto, has signed to play for the Clemson women’s tennis program and will join the team in January 2016. Broomfield has been ranked as high as 680th in singles and 467th in doubles in the WTA national rankings. Both career-best rankings were achieved in the spring of 2015.

Broomfield has won two career ITF $10,000 doubles titles, in 2014 in Victoria, British Columbia and in 2015 in Petit-Bourg, France. Her doubles partner for the Petit-Bourg tournament was current Tiger freshman Marie-Alexandre Leduc, a fellow Canadian who hails from Saguenay, Quebec.

Broomfield is a two-time U18 national finalist and Grade 4 ITF winner. Her older sister, Kai, played tennis at Marshall from 2012-15.