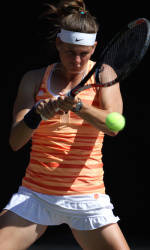 ATHENS, GA — Though her 6-1, 6-1 victory over Arizona State’s Hannah James clinched Clemson’s 4-0 victory in the first-round of the NCAA Tournament Friday, Klara Vyskocilova was a little upset. She was upset because she had no idea her teammate, Josipa Bek, was one point from setting Clemson’s all-time record in total victories.

It wasn’t until after the match when Vyskocilova learned that Bek, who was head of ASU’s Michelle Brycki 40-30 with a 5-1 lead in the second set, needed a point to break Jody Trucks’ record of 223 career wins.

“Why didn’t you tell me that,” Vyskocilova said after the match to Jeff Kallin from Clemson Sports Information. “I would have hit it into the net had I known that.”

Bek, who also beat Brycki 6-4 in the first set, was not upset at all.

“We were going point for point there,” Bek said. “It was fun. But it was okay. It’s about winning the match and advancing. She finished and that’s a good thing.”

It was also a good thing that Bek at least tied Truck’s record thanks to she and teammate Keri Wong’s 8-6 doubles victory over Brycki and Joanna Smith of Arizona State. Truck held the record on her own for 28 years after setting the mark with 223 victories from 1980-84.

“That’s cool,” said Wong, who is third in school history with 220 overall wins. “Good for Jo. She deserves it. We haven’t had the kind of year we had hoped, but today we played as well as we have played in a long time.

“It was good to get that win for Jo and even better that we have moved on in the tournament.”

Bek’s victory was the icing on the cake for the senior, who will graduate this evening, along with Wong and Nelly Ciolkowski, at 6:30 p.m. In one day, she helped her team win its 11th straight match in the first round of the NCAA Tournament, tie the all-time record for career victories and now graduate.

“It’s a good day,” Bek said with a smile. “It’s so weird to think about it. I’ll try to go celebrate, and enjoy today.”

Clemson head coach Nancy Harris says it has been a joy to watch Bek succeed, especially this year after she has fought back through some difficult adversity.

“I have to say that seeing Jo tie this record is one of the more special events in my whole life,” Harris said. “I cannot tell you how big that is to me. If she is not the greatest, she is one of the greatest players to have ever played at Clemson.

“She has come through a lot of adversity this year, and today she played unbelievable tennis. She played great tennis. She is doing all the things she wants to do with the ball. She was really exciting to watch. She is such a great player. She is very dangerous and I think she proved that today.”

Bek will have to be just as dangerous on Saturday as the 24th-ranked Tigers (16-9) advance to play the winner of No. 6 Georgia vs. College of Charleston match. Saturday’s match is set for 3 p.m. But for now, Bek, Wong and Ciolkowski will enjoy the present, which includes getting the opportunity to walk across the stage at Littlejohn Coliseum and receive their degrees.

After Friday’s Arizona State match, the three Tigers joined their families and made the 73-mile trek back to Clemson for graduation. When it’s over, they will all get back in the van and be back in Athens by 11 p.m.

“It makes for a long day, but it is all worth it,” Wong said.