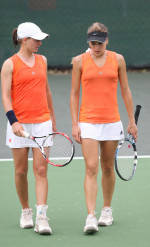 PACIFIC PALISADES, CA – #14 Ina Hadziselimovic won three matches in the qualifying round to advance to the 16-team main draw at the ITA National All-America tournament at the Riviera Tennis Club. Bek is also in the 32-player singles field, earning an automatic bid by virtue of her #9 overall ranking.

The doubles team will start play on Thursday afternoon against #17 Joyce Ardies and Denise Dy of the University of Washington. Bek will take on #36 Michaela Kissel of Marshall in the first round of singles at 3:00 pm eastern on Thursday.

Two Tiger doubles teams competed in the qualifying rounds of the tournament. Clemson’s #34 duo of Keri Wong and Nelly Ciolkowski took out #48 Carolyn McVeigh and Mallory Burdette of Stanford in the first round, 8-5. However, they fell in the second round to #18 Katrina Tsang and Shinann Featherston of North Carolina, eliminating them from competition.

Bek and Hadziselimovic opened with Muci and Pazo from Florida International, winning 8-5. In the second round, the defeated Morgan Frank and Elze Potgieter of Texas A&M, also 8-5. They then rolled #30 Amy Markhoff and Suzie Matzenauer of Cal Poly in the third round to earn a spot in the Main Draw.

Upon completion of the ITA All-American Championships, the Tigers will begin play at the ITA Southeast Regional Championships in Winston-Salem, NC from Oct. 21-26.