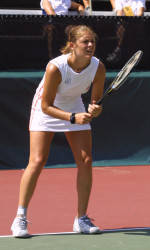 PACIFIC PALISADES, CA – Clemson’s top doubles team of Daniela Alvarez and Maria Brito won three qualifying round doubles matches to advance to the main doubles draw in the Riviera/ITA All-American Championships. Alvarez and Brito will be joined by Julie Coin in the main draw, as Coin begins play in the singles bracket on Thursday. The Tigers’ doubles team of Alvarez and Brito will face 12th-ranked Jennifer Magley and Zerene Reyes of Florida in their first round match. Fourth-seeded Coin will also face a ranked player, as she is set to play 15th-ranked Megan Muth.

In qualifying round play, the sixth-seeded duo of Alvarez and Brito defeated Pepperdine’s Eva Dikes and Bianca Dulgheru by a score of 8-6 in round one. The Tigers topped Oregon’s tandem of Dominika Dieskova and Daria Panova by a score of 8-6 to advance to the qualifying round finals, where Alvarez and Brito posted an 8-4 decision over Boglarka Berecz and Nina Suvak of Florida to qualify for the main doubles draw.

On the opposite side of the qualifying doubles draw, the Tigers’ Coin and Romy Farah won their first-round match over Tulane’s Nancy Kockott and Julie Smekodub by a score of 8-1. Coin and Farah dropped a heart-breaking 9-8(7) decision to Katie McGaffian and Lindsay Martin of Wisconsin in their second round match.

In the qualifying singles draw, Daniela Alvarez lost her first round singles qualifying match, falling 6-4, 6-1 to Suzanna Lingman of Harvard. Alvarez also won her first two consolation round matches, defeating Lolita Frangulyan of Florida by a score of 7-5, 6-2 in the first round then downing Anna Erickson of Sacramento State by a score of 6-3, 6-3 in her second round match. Romy Farah won her first round qualifying match, after earning a spot in the draw as a “lucky loser” from the prequalifying tournament. Farah defeated California’s Sasha Podkolzina in straight sets (6-4, 6-3), but fell to Ashlee Davis of Wake Forest in three sets in the second round (6-0, 4-6, 7-5).