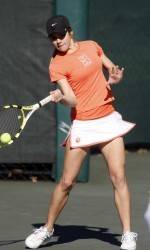 The weekend has serious ACC Tournament implications, as the Tigers currently sit in third place in the league, with the Tar Heels in second and the Blue Devils in fourth.

Video of the matches will be available on the internet on TigerCast, and live scoring is also available. Sunday’s match is Senior Day, and Clemson will honor Ina Hadziselimovic and Estefania Balda before the match.

Clemson and North Carolina met three times in 2009, with Clemson winning the regular season and NCAA tournament matchups and the Heels winning the ACC Tournament match. In all, Clemson has a 37-14 record against the Tar Heels.

Duke, the defending National Champions, defeated Clemson last season in the teams’ only showdown in Durham. Duke holds a 24-18 series advantage, including an 8-8 mark in Clemson.

The Tigers enter the match with four singles players ranked in the Campbell/ITA Poll. Sophomore Josipa Bek is #24, and boasts a 22-12 record in 2009-10. She has 11 wins this year against nationally-ranked foes. Sophomore Keri Wong is ranked 53rd, a career best. The Jackson, MS native is 21-7 overall, and 17-3 in dual match play, primarily at the #2 slot.

After the Tigers’ weekend with top-ten opponents, they will travel to Virginia Tech and Virginia to close out the ACC regular season. The tournament will be held from April 22-25 in Cary, NC.