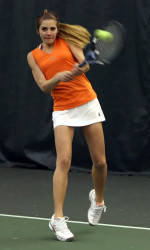 LEXINGTON, KY – Playing without two of their top singles players due to injury, the 14th-ranked Clemson women’s tennis team fell to #20 Kentucky on the road on Sunday afternoon. Even with a forfeit at the sixth singles position, the Wildcats managed just the 4-3 decision, which extended their winning streak to eight straight. The Tigers are now 8-4 on the year with all four losses coming against ranked opponents.

Clemson dropped the doubles point for only the second time this season as Kentucky picked up wins on courts one and two. Carolina Escamilla and Caroline Lilley teamed up at the top spot against the Tigers’ 27th-ranked duo of Ina Hadziselimovic. The Wildcat pair took the lead early and never looked back to securing the win, 8-3. Clemson grabbed an 8-5 decision on court three as Ani Mijacika and Alexandra Luc defeated Whitney Spencer and Minnette. However, Kentucky’s Megan Broderick and Christine Johnston clinched the doubles with an 8-3 victory at flight two over Laurianne Henry and Keri Wong.

The Wildcat lead went to 2-0 as the Tigers were forced to default at the sixth singles position.

Spencer scored Kentucky’s third point of the afternoon on court four. The Wildcat player trailed in the first set, 5-1, to Luc, but Luc couldn’t hold onto the lead as Spencer won the set, 7-6. Spencer then won the second set by a 6-2 margin.

Wong put Clemson on the board after she handed Christine Johnston her first loss of the season at flight three. Johnston won the first set, 6-1, but Wong took the next two sets, 6-2, 6-2, for the come-from-behind victory. Bek then won her fifth straight singles match with a three-set decision over Escamilla at the top flight. Bek also posted wins in the second and third sets after dropping the first (1-6, 6-2, 7-5). After Escamilla led most of the first set, Bek rallied back to grab a close 7-5, third set for Clemson’s second point.

Ina Hadziselimovic then defeated Megan Broderick, who is nationally ranked at No. 86, in another three-set battle, to tie the match at 3-3.

Lilley then clinched the match for the Wildcats with a win over Henry at flight five (6-2, 6-2).