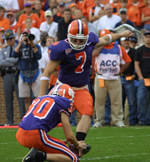 The #2 Tiger Tracks 2004 Football Play of the Year comes from the Miami game. Playing one of the ACC’s new members for the first time, Tommy Bowden welcomed the Hurricanes to the conference by pulling out an old trick. He called for a fake field goal that worked to perfection and tied the game at 17 in the fourth quarter. It wasn’t the first time Coach Bowden went to a trick play against an ACC team in Florida. You can watch both plays now on Tiger Tracks.

This file is approximately 1.5 MB

#6: Miller Leaves Deacs in the Dust

#8: Coleman Takes it to the House

#9: Charles in Charge of Victory