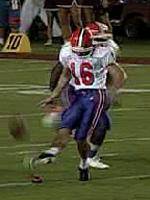 Whenever the Bowdens get together chances are there will be some trickery involved. Tommy Bowden might have pulled off the most surprising play in the four Bowden Bowls when he had his team on-side kick after the Tigers first score, Clemson’s first kickoff opportunity, in the first quarter of the 2002 contest. Stephen Furr and J.J. McKelvey had been practicing the play all week and they worked it to perfection, giving Clemson the ball after the Tigers had tied the game at seven.

“The thing about that is you can’t practice it in pregame,” said Bowden the next day. “Rodney Allison had noticed in his film study that the player on that side of the field was retreating early to get into blocking position, so we decided to try it.”

McKelvey recovered at the Florida State 49 and Clemson drove for another touchdown, giving Clemson a 14-7 lead, its first lead in Tallahassee at any point of a game since 1989.

What was especially noteworthy is that the on-side kick was the first recovered by a Clemson team since the 1979 season. The Tigers last recovered an on-side kick in the fourth period of the 1979 Peach Bowl against Baylor. Clemson did not score on its extra possession that day and lost 24-19.

This file is approximately 2.5 MB