Note: The following appears in the Miami football gameday program.

Clemson’s path to the forefront of elite athlete recovery started with a culture change. For generations, despite the best efforts and cheeriest dispositions of athletic trainers, an unfortunate misconception lingered.

Completed in August, 100 Yards of Wellness represents the natural evolution of Clemson football’s long-time commitment to student-athlete health and wellness. By literally and figuratively breaking down walls that divided the focus areas, the new space combines Clemson’s athletic training and rehabilitation expertise with its continued innovation in active recovery and applied science.

“Now, it’s a total wellness commitment…the mental side, the wellness side, the ‘prehab’ side, the applied science side, your stretching, your nutrition…all of it combined in this one big space,” stated Swinney. “It has created an environment where the guys want to be there all the time. They’ve really bought into it. It’s been an awesome addition for our program.”

After moving into the gleaming Allen N. Reeves Football Complex in early 2017, Swinney and his staff remained vigilant for ways to improve the new facility. At the behest of Swinney, Clemson staff members traversed the country looking at athletic performance facilities in search of ideas.

While Clemson was ahead of most in terms of medical facilities, the benchmarking trip revealed an opportunity for Clemson to truly separate itself in the applied science sector.

In 2018, Clemson enclosed what was previously an outdoor patio area to create Clemson Applied Science Lab (or CASL, pronounced “castle”). The area served a two-fold mission. It served as the hub of Clemson’s data and performance analysis as well as a space for “prehab” and recovery.

As Clemson’s student-athletes bought in, the space became one of Allen N. Reeves Football Complex’s most heavily trafficked areas. With demand quickly outgrowing the footprint, Clemson embarked upon the renovation and expansion immediately after the team’s final practice of the spring in 2022. It reopened at the start of fall camp in August to rave reviews.

“Our players love it,” said Swinney. “It has made a huge difference for us. It’s one of a kind in college football.”

Whereas walls previously divided the athletic training room from the recovery space, the new open-concept area features Clemson’s medical diagnostic and treatment area to the north and the recovery space to the south, bisected by a nutrition bar. Visitors to the space are often surprised to find an almost club-like atmosphere with upbeat music and moving colored lights, creating a welcoming environment rather than a stale, clinical one.

“There is no one in the country I would rather have caring for our student-athletes in these positions than the duo of Pat Richards and Alex Bina,” added Swinney. “Pat is incredibly well-respected and is a young, dynamic leader in the athletic training industry.

“Alex is a great example of blooming where you’re planted. He started as a student volunteer who went from working from a laptop on a weight room stool to creating an applied science department that operates college football’s premier recovery facility. They are the best in the business, and that shows in how much our players love them and trust them.”

The treatment and training room area includes all requisite athletic training resources, including a diagnostic office with a full digital X-ray space and diagnostic ultrasound, general medical exam room, 30 yards of turf and hydrotherapy areas, including two underwater treadmills. Among the many features of the recovery center are:

The renovations also included updating Clemson’s outdoor basketball court into an indoor basketball court, which, in addition to being a source of friendly competition for players and staff, now can be transformed following games into a movement studio for active recovery modalities like yoga.

At its inception, Clemson’s facility was famous for, among other things, the inclusion of a nap room. That area’s inclusion was driven by Swinney, who reviewed research that indicated that lack of sleep was one of the biggest sources of mental health problems in young people.

Clemson Applied Science Lab also became a nap destination, but the high-energy vibes and heavy traffic of the subsequent 100 Yards of Wellness space required an additional solution. Atop a portion of the south end of the recovery area is what the team calls “Tranquility Tower,” an upstairs, quiet location with much of the same recovery equipment, but in a serene, peaceful environment conducive to rest and away from the social activity of the main floor.

The program’s recovery resources have become a source of envy for its former players. Two-time All-American and current Green Bay Packer Sammy Watkins told Swinney that he routinely spends more than $50,000 annually on services to maintain his body now provided to Tiger student-athletes for free.

Philadelphia Eagle safety K’Von Wallace visited the expanded space for the first time in October and expressed his amazement at the facility as well as his jealousy that renovations came following his playing career at Clemson.

But for members of the Tigers’ current roster and for signing classes to come, they can rest, and recover, easy knowing Clemson is committed to providing best-in-class facilities and care to remain leaders in student-athlete health and wellness.

“Being in my fifth year, it’s been nothing less than a blessing,” said defensive end K.J. Henry, who has seen the evolution of Clemson’s wellness areas since arriving in 2018. “When I first got here, I rarely tapped into the CASL and the well-being of my body, but now seeing what it’s evolved into, I pretty much live in there now. It’s definitely an upgrade from what we had and puts us a notch ahead in player wellness.” 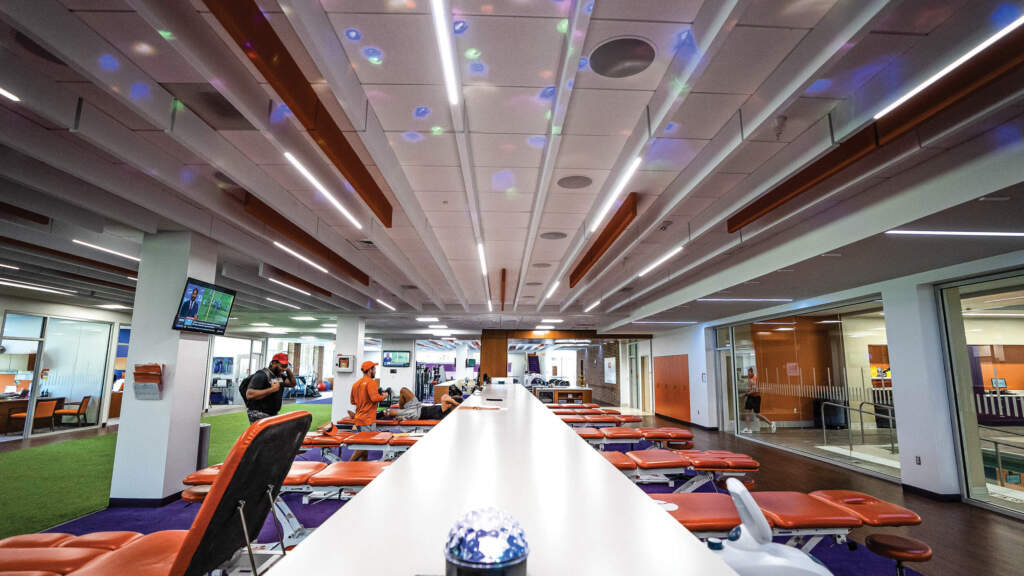