“If you are lucky enough to ever witness this, you will not forget it. It is perhaps the greatest entrance in sports.” – ESPN’s Chris Fowler in 2016

What has been described as “the most exciting 25 seconds in college football” from a color and pageantry standpoint actually started out as a matter-of-fact entrance, mainly because of necessity.

The first 20,000 seats in Memorial Stadium were built and ready for use before the 1942 season, less than a year after Pearl Harbor was bombed and the United States was drawn into World War II.

The shortest entry into Memorial Stadium was a short walk down Williamson Road from Fike Fieldhouse’s dressing rooms to a gate at the top of the Hill, located behind the East end zone. There were no dressing facilities inside the West end zone of Memorial Stadium… there was only a giant clock, where the hands turned, and a scoreboard that was operated by hand.

The team would dress in Fike Fieldhouse, walk down Williamson Road, come in the gate underneath where the scoreboard now stands and jog down the Hill for its warmup exercises. There was no fanfare, no cannon shot fired, no Tiger Paw flag, no “Tiger Rag” played… just the team making its entrance and lining up to do the side-straddle hop. That is the way things went for the next 25 years.

The rock laid on the floor in Howard’s office in Fike Fieldhouse for years. One day, he was cleaning up his office and told Gene Willimon, who was executive secretary of IPTAY, to “take this rock and throw it over the fence or out in the ditch…do something with it, but get it out of my office!”

Willimon did not think that was the way a rock should be treated. After all, it had been brought over 1,900 miles by a very sincere Tiger fan.

By the mid-1960s, Memorial Stadium was living up to its moniker (“Death Valley”) because of the number of Tiger wins that had been recorded there. Actually, the name was first used by Lonnie McMillian, head coach at Presbyterian College during the 1940s.

McMillian and the other Blue Hose coaches before him opened each season by playing at Clemson. Seldom scoring (24 shutouts in 39 games) and with only three wins and four ties to show for it, his teams were getting “killed” by the Tigers regularly.

In 1948, McMillian made the comment to the press that he was taking his team to play Clemson in “Death Valley.” An occasional reference to Memorial Stadium by that name could be heard the next four years, but when Howard started calling it “Death Valley” in the 1950s, the name took off like wildfire. Clemson celebrated its 80th year in the “Valley” in 2021 with a 6-0 home record, its fifth straight undefeated home campaign.

But getting back to Howard’s Rock.

It was mounted on a pedestal at the top of the Hill on the East side of the stadium. It was unveiled Sept. 24, 1966, when Clemson played Virginia. The Tigers trailed by 18 points with 17 minutes left and came back to win 40-35 on a 75-yard pass from Jimmy Addison to Jacky Jackson in the fourth quarter. That was quite a debut for the Rock.

The team members started rubbing Howard’s Rock prior to running down the Hill on Sept. 23, 1967, a day when Clemson defeated Wake Forest by a score of 23-6.

Prior to running down the Hill, Howard told his players, “If you’re going to give me 110 percent, you can rub that Rock. If you’re not, keep your filthy hands off it!”

Howard told of the incident the following day on his television show, and the story became legend.

When Hootie Ingram succeeded Howard as head coach in 1970, he made the logical decision that the team would make its final entrance out of the new dressing room in the West end zone. In all home games during the 1970 and 1971 seasons and the first four games of 1972 when the Tigers did not run down the Hill, their combined record was 6-9.

The seniors, led by Ben Anderson, decided they wanted to come down the Hill prior to the South Carolina contest, the finale of the 1972 season. The result, in a cold, freezing rain, was a 7-6 victory when Jimmy Williamson knocked down a two-point conversion attempt, which preserved the narrow win.

Clemson has made the entrance every home game since 1942, except for the years mentioned above and the first game of 1973 (428 times entering 2023).

After final warmups, the team gathers back in its dressing room under the West end zone stands for its final game instructions. Approximately 10 minutes prior to kickoff, the team boards three buses, rides around behind the North stands to the East end zone and disembarks to the top of the Hill behind Howard’s Rock.

At the appointed time, the cannon booms, and led by a giant Tiger Paw flag carried by cheerleaders and Rally Cats, the band forms two lines for the team to run between and strikes up “Tiger Rag”… the frenzy starts in all sincerity and usually lasts for three hours.

It is a tradition that has inspired Clemson players for many years. Yahoo! Sports rated it the best entrance in the nation in 2014, as did USA Today in 2017. 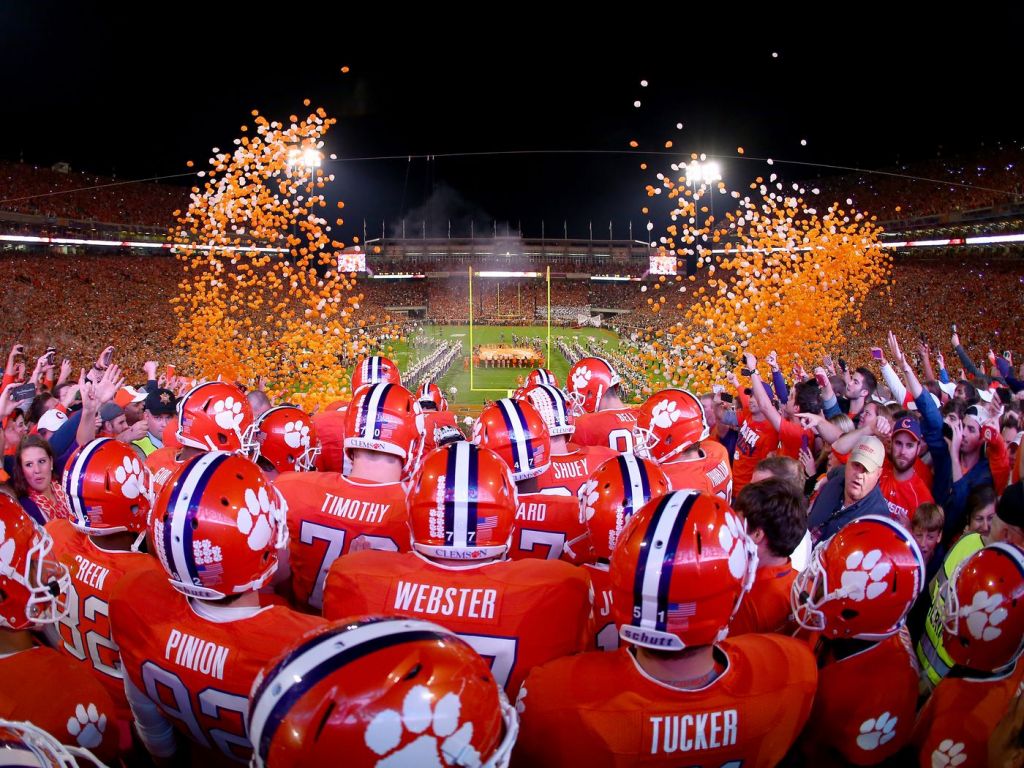