Clemson’s Memorial Stadium has been held in high esteem for many years. Whether it be players from the 1940s and 1950s, opposing players from the 1970s and 1980s or even professional players in the 1990s, the ambiance of this special setting is what college football is all about.

The storied edifice added to its legend when the first meeting of father-and-son head coaches (Bowden Bowl I) took place before a record crowd of 86,092 fans in 1999. Clemson has finished in the top 20 in the country in average home attendance for 40 straight seasons. In 2019, Clemson ranked 14th in the nation and first in the ACC in average home attendance. Clemson ranked third in the country and first in the ACC in total attendance in 2020.

The legend was further enhanced in 2020, when the Tigers recorded a perfect 6-0 home record to extend their home winning streak to a school-record 28 games. Since the advent of the College Football Playoff prior to the 2014 season, Clemson is 47-1 at home, the highest home winning percentage in the country.

In 2017, StadiumJourney.com rated Memorial Stadium as having the No. 10 stadium experience in the nation for all sports and No. 1 for college football. The facility’s mystique is derived from its many traditions, which date to its opening in the 1942 season, the legendary games and players and Clemson’s corresponding rate of success. Entering 2021, the Tigers have totaled 322 wins in 79 years and have won 75 percent of the contests (322-102-7). Visiting defending national champions are 0-3 all-time at Memorial Stadium.

The stadium has definitely been good to the Tigers, but it was constructed against the advice of at least one coach. Before Jess Neely left for Rice after the 1939 season, he gave Clemson a message.

“Don’t ever let them talk you into building a big stadium,” he said. “Put about 10,000 seats behind the YMCA. That’s all you’ll ever need.”

Instead of following Neely’s advice, Clemson officials decided to build the new stadium in a valley on the western part of campus. The place took some clearing, as there were many trees, but luckily there were no hedges.

The crews went to work, clearing, cutting, pouring and forming. On Sept. 19, 1942, Memorial Stadium opened with Clemson defeating Presbyterian College 32-13. Those 20,000 seats installed for the opener would soon grow.

When the original part of the stadium was built in the early 1940s, much of the work was done by scholarship athletes, including football players. The first staking out of the stadium was done by two members of the football team, A.N. Cameron and Hugh Webb. Webb returned to Clemson years later to be an architecture professor and Cameron went on to become a civil engineer in Louisiana. 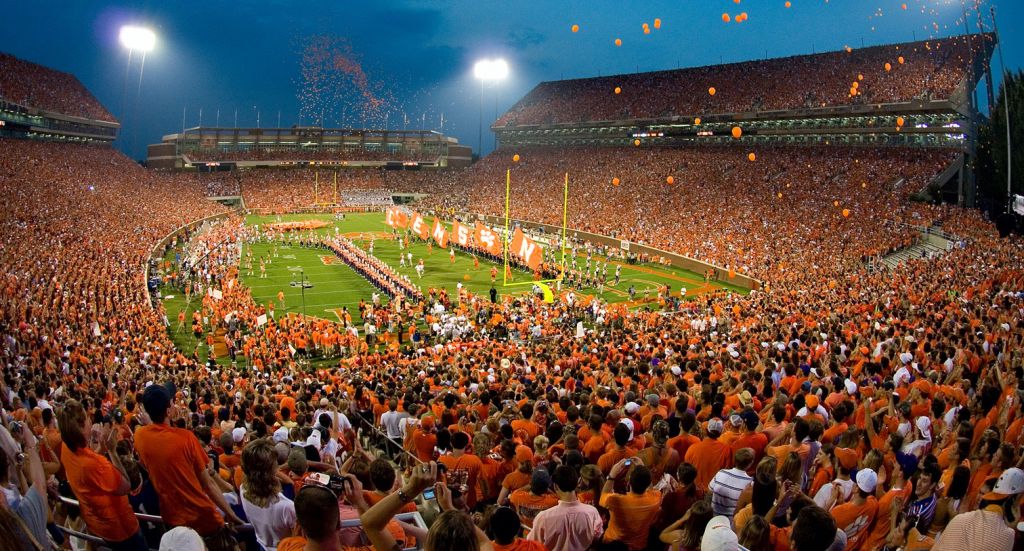 The construction of Memorial Stadium did not proceed without problems. One afternoon during the clearing of the land, a young player proudly announced that he was not allergic to poison oak. He then proceeded to attack the poison oak with a swing blade, throwing the plants to and fro. The next day, the boy was swollen twice his size and was hospitalized.

There are many other stories about the stadium, including one that Frank Howard put a chew of tobacco in each corner as the concrete was poured.

Howard said that the seeding of the grass caused a few problems.

“About 40 people and I laid sod on the field,” he said. “After three weeks on July 15, we had only gotten about halfway through.

“I told them that it had taken us three weeks to get that far and I would give them three more weeks’ pay for however long it took to finish. I also told them we would have 50 gallons of ice cream when we got through.

“After that, it took them three days to do the rest of the field. Then we sat down in the middle of the field and ate up that whole 50 gallons.”

Howard said on the day of the first game in the stadium, “The gates were hung at 1 p.m., and we played at 2 p.m.” But that would be all of the construction for a while.

Later, upper decks were added to each side of the stadium as crowds swelled, the first in 1978 and the second in 1983. It increased capacity to over 80,000, which makes it one of the largest on-campus stadiums in the country. In 2006, the WestZone was added, an area that contains locker rooms, offices, a student-athlete enrichment center and luxury club level that holds over 1,000 seats.

The effect that inflation has had can be dramatically seen in the differences in stadium construction. The original part of Memorial Stadium was built at a cost of only $125,000, or $6.25 per seat. Memorial Stadium’s newest upper deck was finished in 1983 at a cost of $13.5 million, or $866 per seat.

Through the years, Memorial Stadium has become known as “Death Valley” across the country. It was tagged by Presbyterian College Head Coach Lonnie McMillian during the late 1940s. After bringing his teams to Clemson for many years and getting whipped, he said the place was like “Death Valley.” A few years later, the name stuck.

In 1974, the playing surface was named Frank Howard Field for the legendary coach because of his long service and dedication to Clemson University.

Luckily, it wasn’t built behind the YMCA.