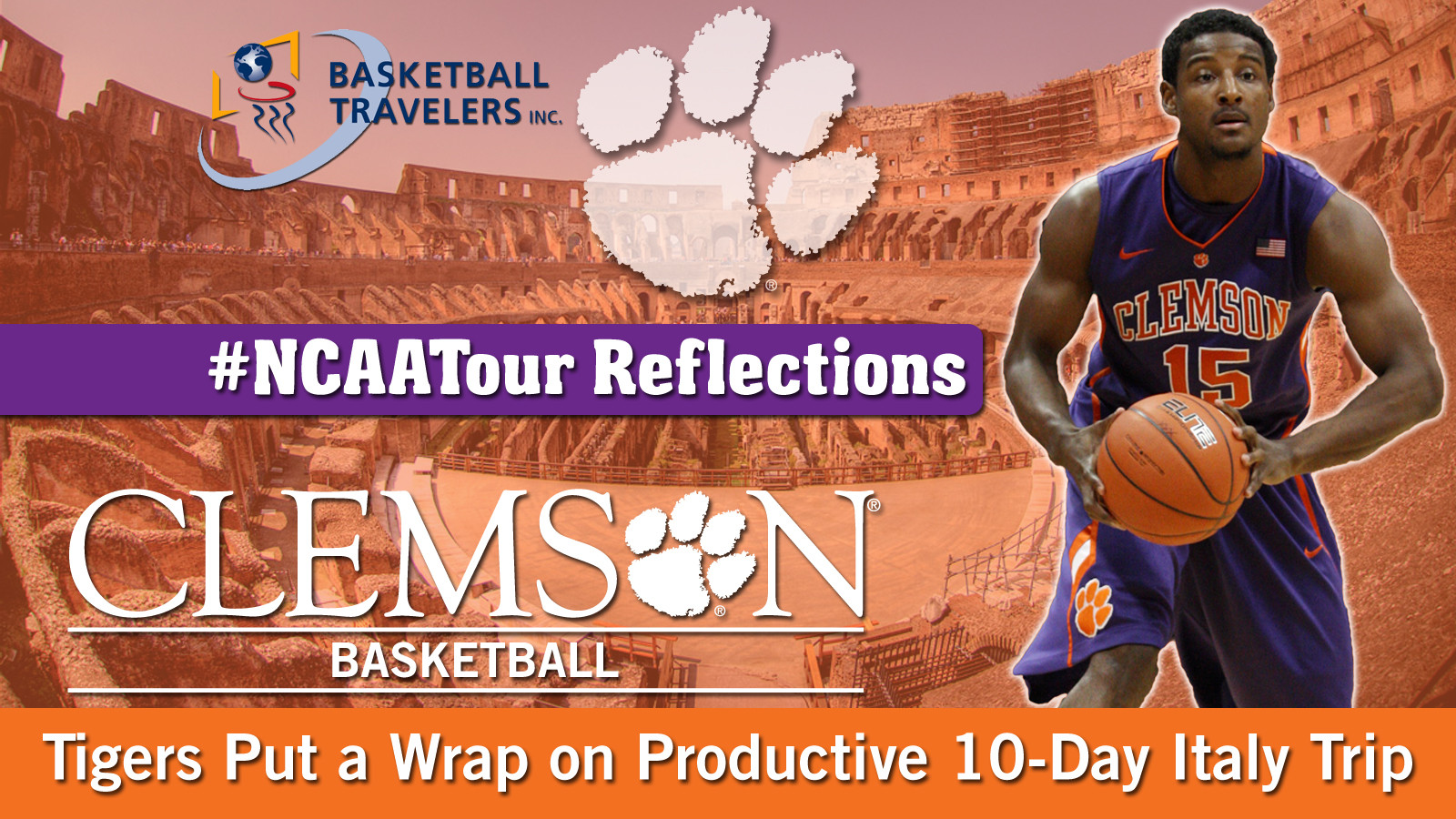 As I type this, the team is on its way home to Clemson from Atlanta’s Hartsfield International Airport.  It’s been a fun, but exhausting 10-day trip to Italy.  I cannot speak for everyone, but I know I certainly learned a great deal about the Italian history and culture by visiting the cities of (in order) Rome, Florence, Vicenza, Venice and Como.  It was one of those once-in-a-lifetime opportunities, and I’m grateful for the opportunity to have been part of the trip.

The trip would not have been possible without the efforts of everyone involved in making sure we had a good time in our foreign tour experience.  Special thanks to Mike and Brad from Basketball Travelers, Inc., and to Moira and Alessia of Dream Team Italy, for their excellence as hosts to our travel party throughout the 10-day trip.  We also want to thank Aaron Dunham from our major gifts team for helping spread the positive message of Tiger basketball on to the program supporters who paid to make the trip with the team.

We are very encouraged by the number of unique visitors and page views our blog, photo galleries, highlights and interviews were able to bring to ClemsonTigers.com.  We wish to thank all of Tiger Nation for checking in daily to see what type of activities we got into, and how the team performed in its four games.

Speaking of the four games, I recall writing in my first blog entry back on Aug. 8 that I would be utterly shocked if the team approached the offensive numbers achieved on Clemson’s last trip overseas in the summer of 1981.  Bill Foster’s team averaged nearly 100 points per game.  Well, call it the level of competition or whatever you wish to call it, but Brad Brownell‘s team averaged 95.2 points per game over the four contests.  Apparently I don’t know anything.  That, or either I severely underestimated the number of possessions in a game involving a 24-second shot clock!

The following are some of the highlights of the trip, both on and off the court.  Keep in mind, these opinions are solely my own and not necessarily reflective of the other members of our travel party.  But with a full day of air travel to reflect, I came up with some superlatives from our Italian experience.

Best Tour(three-way tie) The Colosseum, the Vatican and Lake Como by boat

Biggest SurprisePaying one Euro to use public restrooms in Venice

Most Valuable PlayerK.J. McDaniels, Jr. – Second on the team with 15 points per game, it was his energy plays around the basket on both ends of the floor that often ignited the Tigers.  He led the team with 12 blocked shots and was third at 9.3 rebounds per game, while often playing out of position as the team’s ‘4 man’ due to the lack of bodies inside.

Most Improved(tie) Damarcus Harrison, Jr. & Josh Smith, So. – Both players admittedly struggled with conditioning last season.  In Damarcus’ case, I believe it truly affected his play.  He looked like a more confident player on this trip, and the numbers (11 ppg, 6.5 rpg) reflected that.  I was also impressed with Josh’s overall improvement, particularly with his relentless pursuit of rebounds (13 per game) on both ends of the floor.  Nobody fought harder than him on the glass.

Most ConsistentJordan Roper, So. – Only he and K.J. reached double figures in all four games.  Roper had the team’s highest scoring game of the trip, with 21 in the opening game.  He also shot nearly 50 percent from three-point distance, while playing with the ball in his hands a great deal more than we saw last season.

Best DefenderLandry Nnoko, So. – The Tiger big was a shot-changer inside for the overmatched Italian teams.  No team possessed the size to attack Clemson inside, and part of that was due to Nnoko’s ability to protect the rim.  He had 11 blocked shots and averaged 11.5 rebounds per game, both figures were second on the team this trip.

Best Individual MomentDevin Coleman, *So. – In his first game since returning from a torn Achilles, Coleman went 5-for-9 and finished with 13 points in the Tigers’ opening win of the Italy tour.  He went on to have a productive four-game stretch, averaging 9.8 points per game (fourth on the team).

With Devin’s return in mind, I caught up with the native of Philadelphia, PA for our final player Q&A of the trip.

Q: This trip was big for you from a confidence standpoint, due to the fact you returned to the court for the first time since the injury that forced you to miss last season.  How did it go?Coleman: “It felt good to get back out there with my teammates.  As long as I had been out, I almost forgot what it felt like to play a real game and to be coached, to remember plays – that kind of stuff.  I believe I adjusted pretty well.  I look forward to carrying it over into the season.”

Q: Was there a particular facet of the games that you struggled with at all?Coleman: “Speed of the game, maybe.  Being out that long with that type of injury obviously slows you down.  I still don’t really feel as fast as I used to be, but I was able to keep up.  Obviously, I need to do a little more work to regain some speed.  That was probably the most difficult part.”

Q: How did team chemistry improve this past 10 days?Coleman: “We were already pretty close, but I think we became even closer.  With a trip like this, you don’t understand what people are saying, so you have to stick together.  We were around each other all the time, so I think it was great for team camaraderie.  I loved it, and I believe a lot of guys did as well.”

Q: Twenty years from now, what will you remember most about this experience?Coleman: “Everything, really.  It was my first time being out of the country.  Just hanging out with these guys on a day-to-day basis is something I like to do, so doing it overseas in Italy was just a bonus.”