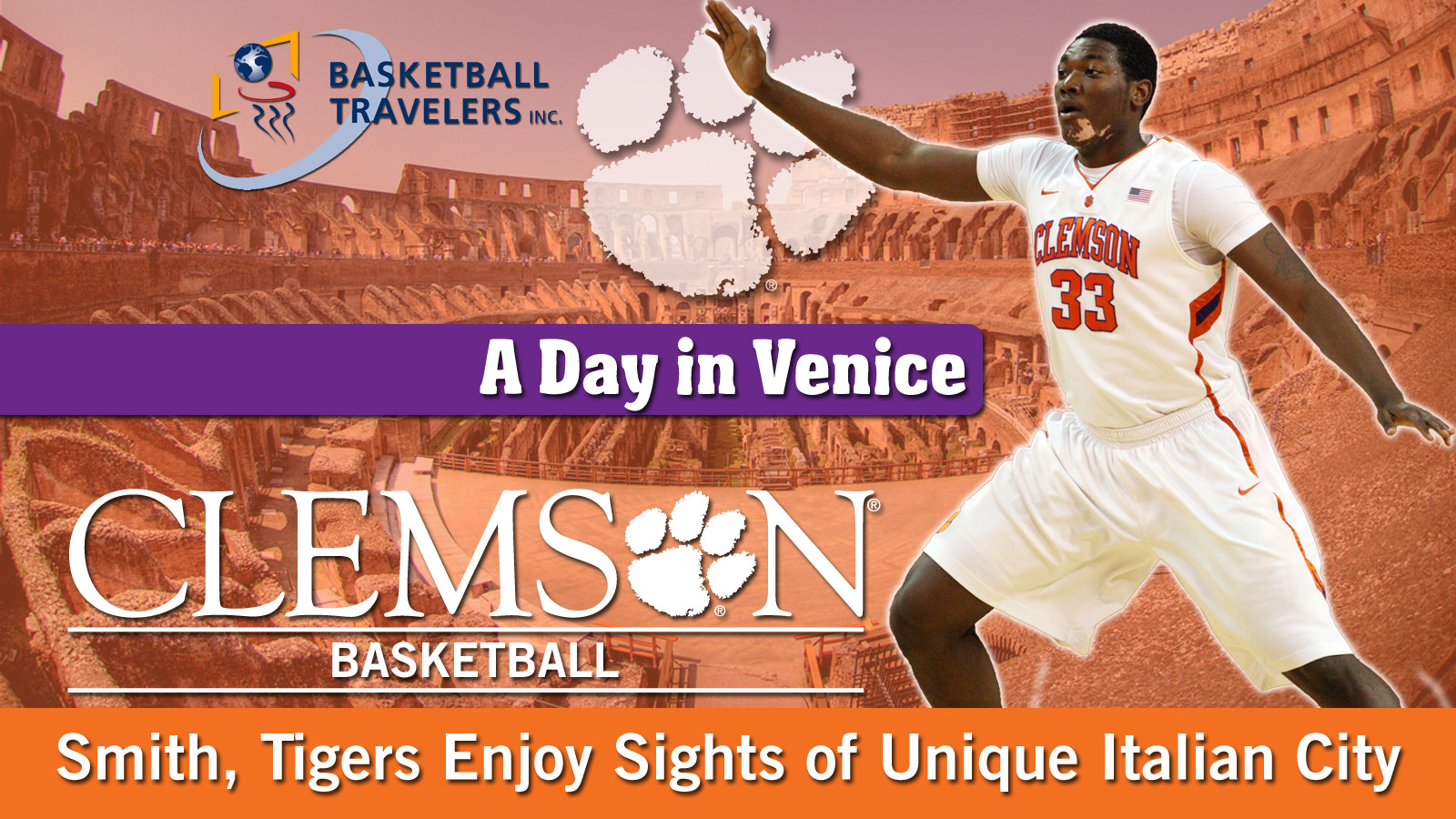 Wow, what a day!  We headed out to Venice about 8:30 this morning and arrived in the port a little after 10:00.  From there, our groups divided up onto water taxis to travel through the Grand Canal and into the multi-island city.  Each water taxi held up to 10 people, and I boarded alongside Associate Head Coach Mike Winiecki and his fiancée Marquita Brown, with players Devin Coleman, Rod Hall, Damarcus Harrison and K.J. McDaniels.

I had no idea until today that this was Damarcus’ second foreign trip.  How’s that for just over two years in college?  Prior to his first year at Brigham Young University, he and the Cougars traveled to Greece for a tour.  We discussed that this was a much easier boat ride than the six-hour one he took to the island of Crete in the Mediterranean Sea.

The ride through the canal was crazy – there was as much boat traffic as you see on highways in some cities in the U.S.  Every few meters you’d see gondolas taking tourists through tight alleyways within the city.  I’ve never seen anything like it in my life!  It was about a 30-minute taxi from the port to the St. Mark’s (San Marco) Square – the centerpiece of Venice.

The first item on our itinerary was to visit the Vecchia Murano Glass Factory.  Of all the amazing things we’ve seen this week, this might have been the coolest thing yet.  They brought us into the room where the glass master works, and he put on a quick demonstration for us.  In fact, he was so quick that in just two minute’s time he put together a small horse made of Venetian glass.  Then our guide showed us everything they sell, including wine sets, chandeliers, jewelry and more.  The guide explained that each glass master starts a 10-year apprenticeship when they are only 14 years old!  Simply put, it was an impressive demonstration and the products they had in the store were second to none.

With a few hours free before our walking tour, many groups split up for lunch.  We gathered again at the city center in San Marco, to tour the surrounding areas and the cathedral itself.  Just like the churches in Rome and Florence, this one was very old (nearly 1,000 years to be exact) and amazingly still contains original flooring and mosaics on the ceiling.

Our tour guide explained that Venice has over 500 bridges within the various waterways and alleys that connect throughout the city.  Some of our coaches took their families on gondola rides.  Since we rode a boat into and out of the city, most of our party decided to pass on the gondola opportunity.

After nearly seven hours in Venice, we returned to our hotel in Vicenza for a brief time.  We went back out for a night in Vicenza, where we had dinner and gelato before calling it a night.  Tomorrow, we head for our fourth and final destination of this amazing tour – Lake Como.  We’ll have an update on our travels Friday afternoon.

Today, I caught up with sophomore big man Josh Smith for a Q&A.  Josh has performed pretty well through three games of our tour.  He’s only taken 11 shots from the field, but at 11.0 rebounds per game he ranks second on the squad this week.  We talked about his play, as well as some of what he has learned on the trip.

Q: What’s been your favorite sight so far this week in Italy?Smith: “I liked Rome the best.  I really enjoyed the Spanish Steps.  The structure of it, plus all of the shops around, was pretty cool.”

Q: What was your impression today of Venice?Smith: “It’s really crowded, that’s the first thing.  You can tell it’s very historical and how they tried to preserve the buildings.”

Q: How has the team come together this week?Smith: “We have been pulling all-nighters this entire trip.  It’s been a really fun experience, just learning a different culture.”

Q: You’ve been able to play a lot more minutes this trip – what’s your take on how you have played to this point?Smith: “I have really focused on what Coach Brownell wants me to do.  That could be grabbing rebounds, setting screens or getting my teammates open.  Once I get them freed up, I may be open for a dump-down pass to score.  It’s been all about meeting my role as a player.”

Q: You don’t look to score first, has that always been the case with your game?Smith: “It’s a team game.  As an individual, I want to do whatever I can to help us get a win.  That’s what I’m here for.”

Until Friday, arrivederci from Vicenza!