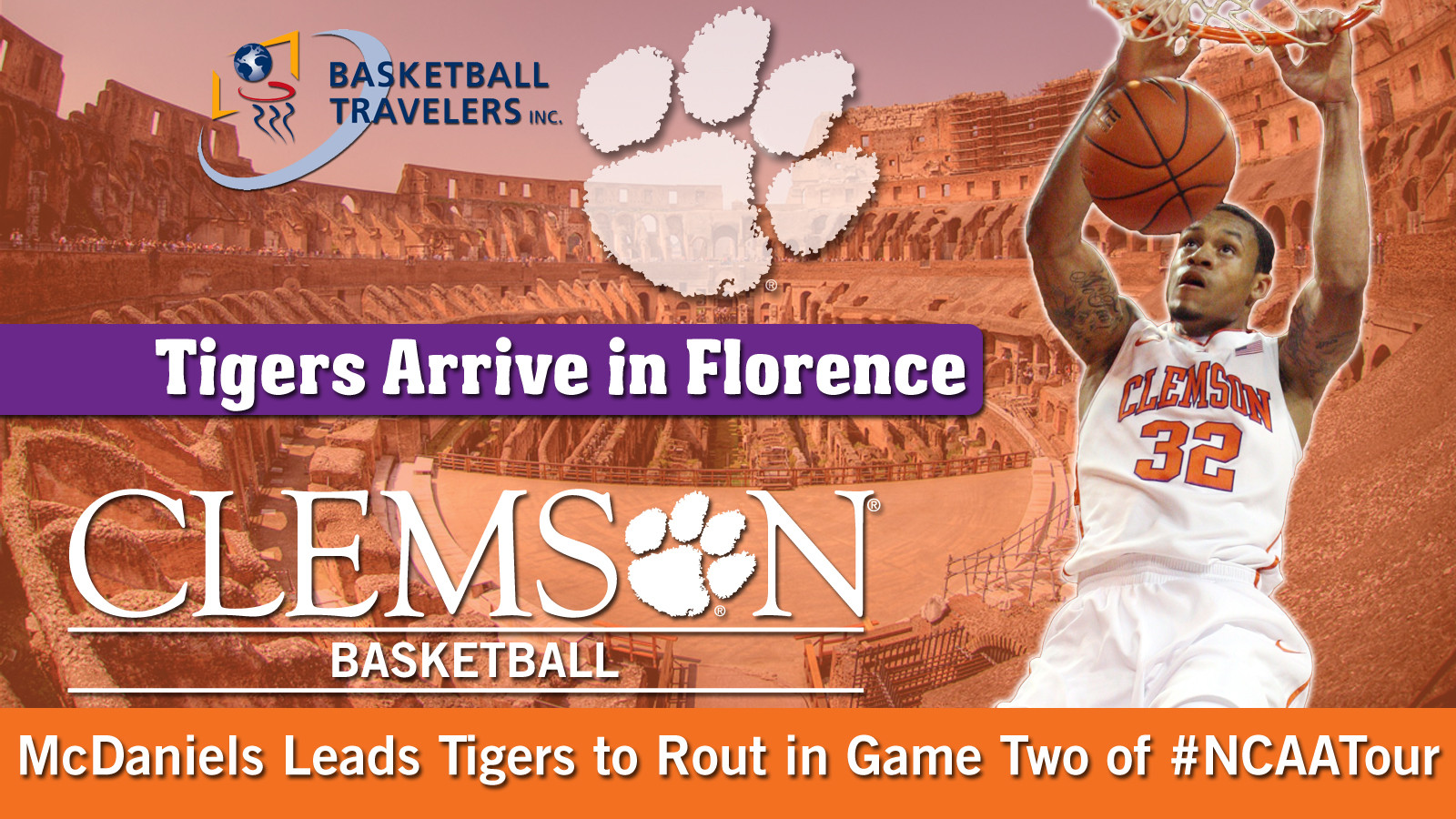 Monday was a travel day for the team.  We packed up and loaded our buses to head north to Florence.  Before we departed, we were informed of some great news from last night.  Associate Head Coach Mike Winiecki had proposed to his longtime girlfriend, Marquita Brown, on the Spanish Steps.  On behalf of the entire staff, we certainly want to wish them congratulations on the engagement!  She had a feeling it was in the works, but the fact it came on this trip was a total surprise to her.  I hope to have a picture of the newly engaged couple in tomorrow’s gallery.

On the way to Florence, we made two stops.  The first was at an Auto Grill – a unique collaboration of a gas station, gift shop, convenience store and lunch destination – all in one.  After a 45-minute lunch stop, we were on the road again.  We pulled over just before we got into the city to enjoy the views from atop the Piazzale Michelangelo.  It offered spectacular aerial views of the city, flanked on the backside by mountains.

We didn’t get much time in Florence due to a tight schedule.  Shortly after arriving, the team ate its pregame meal at a local restaurant.  We enjoyed spaghetti, salad, grilled chicken, potatoes and a fruit bowl.  In a small sample size, you can quickly tell that Florence vastly differs from Rome.  It didn’t seem to have the typical hustle and bustle associated with a high volume of tourists.  After the meal, the team returned for an hour of downtime before boarding the bus for our one-hour trip to the arena.

The Tigers once again had to shrug off a lethargic start, as they fell behind 6-0 before K.J. McDaniels hit a pair of free throws to break the ice nearly four minutes into the game.  Clemson rallied from the deficit to take a slim 20-18 lead after one quarter of play.  In the second quarter, the Tigers flexed some muscle by generating offense off the Dream Team’s turnovers.  In all, Clemson scored 15 points off turnovers in the opening half and took a 44-35 lead into the break behind a 9-3 run.

In the second half, the defensive pressure applied by Clemson was simply too much for the Italians to overcome.  After the Dream Team pulled within eight at 46-38, the Tigers rattled off a 19-1 run to put the game out of reach for good.  Clemson coasted from that point, winning handily by a score of 103-58.  The Tigers ruled the specialty stats, winning all five benchmarks safely – including a whopping 19-4 on second chance points.

Here are some other nuggets from the game:

The Tigers’ only full day in Florence will be Tuesday.  We’ll have all the coverage of the Tigers’ trip to see Michelangelo’s David, the famous Ponte Vecchio Bridge, and a famous cathedral housing a gravity-defying dome.