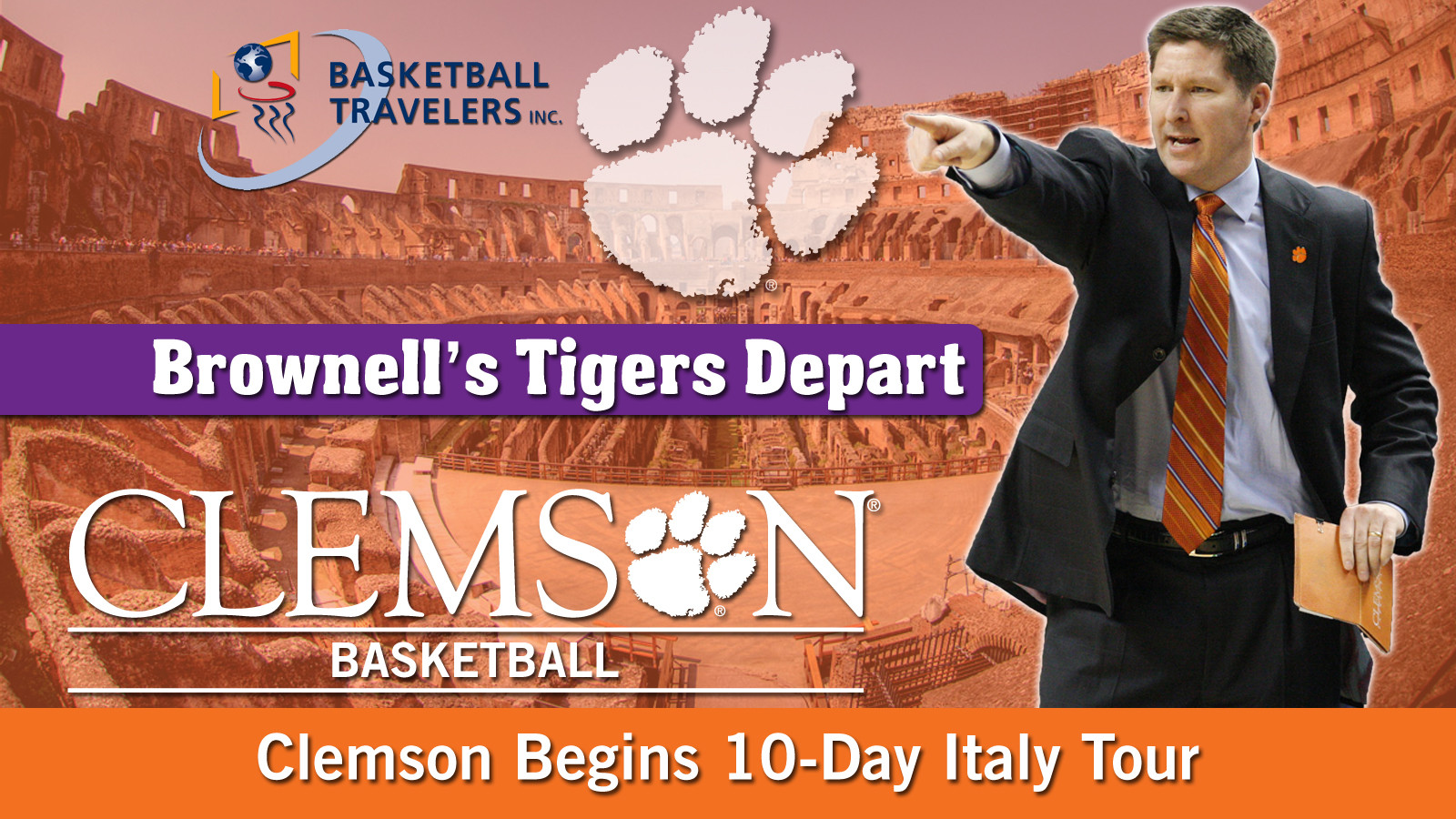 Today, the men’s basketball team begins its 5000+ mile journey to Rome, Italy.  The bus carrying players, coaches, staff and their families departs Littlejohn Coliseum at 11:15 AM for Hartsfield-Jackson International Airport in Atlanta, GA.  We are scheduled for a flight that leaves Atlanta directly for Rome just shy of 4:00 this afternoon.  The flight is slated for nine and a half hours, putting us in Rome at 7:30 AM on Friday.

When we arrive in Rome, we have a full agenda.  We go straight to the city’s historic centre to tour the Colosseum and Roman Forum.  As red-shirt freshman Jaron Blossomgame noted in this video report, he is one of our players that is looking forward to seeing one of the world’s most famous pieces of architecture.  After that, we’ll check into the hotel sometime tomorrow afternoon and have plenty of time to shop, eat and see more sights.

For the travel party, it will feel like the middle of the night on Eastern time.  In other words, it will be like staying up another day.  I’m not sure I’ve ever done that in my entire life, but here’s hoping I’m able to catch some sleep on the plane.  Between season 1 of The Sopranos and a book I brought written by ESPN basketball analyst Jay Bilas, I’ve got plenty to keep me occupied if I do have difficulty sleeping.

Kudos to Basketball Travelers, Inc. for helping us prepare for the trip.  They sent a checklist of items to take care of before we leave, and without it I’m sure many of us would have been lost.  When we land, we’ll meet Mike Hayward, who will be our representative the entire time we’re in Italy.  The same company helped coordinate our trip to the Bahamas over Labor Day weekend in 2007 when Oliver Purnell’s team played a few games and enjoyed the luxurious Atlantis resort.  They do a great job of organizing everything for you on these types of trips.

Believe it or not, this is Head Coach Brad Brownell‘s first trip to Europe.  As he notes in today’s video report, his entire family will be making the trip with us, including his parents.  He offers some thoughts into what the team has learned through its 10 allotted practices, and also addresses the topic of the two post players the Tigers signed this spring.  Ibrahim Djambo and Sidy Djitte are both expected to enroll in August, but neither will be traveling with the team to Italy.  It’s a minor setback, but one that has allowed the staff to experiment with a number of different lineups to get a feel for which players mesh well together on the court.

Throughout our excursion, we will have candid perspectives from the players that will make up the 2013-14 roster.  We hope to bring you, at the very least, daily blogs, photos, statistics and analysis, and much more.  Fans are encouraged to follow us on Twitter (@ClemsonMBB) and Instagram (@ClemsonTigerMBB) for live updates throughout the trip as well.  We also will be using an official hashtag for our trip, #NCAAtour.

Before we get set to unload the bus and go through customs, I wanted to reflect on Clemson’s only other true international trip.  It was the summer of 1981, and Bill Foster’s team went to Brazil to compete in the FIBA International World Cup Games.  This won’t surprise anyone that knows him, but one day last week, our longtime Sports Information Director Tim Bourret dropped a sheet of paper off at my desk.  It was the complete stat sheet from all eight games that were played in Brazil.  I was immediately intrigued with the number of points that were scored.  Clemson averaged 99.8 points per game, and the opposition averaged 96!  Something tells me that we won’t see quite the same scoring offense this time around.  But now the pressure’s on to keep the stats from our four games, so Clemson’s basketball SID can reflect on them 20 or 30 years from now when the Tigers go on another foreign tour.