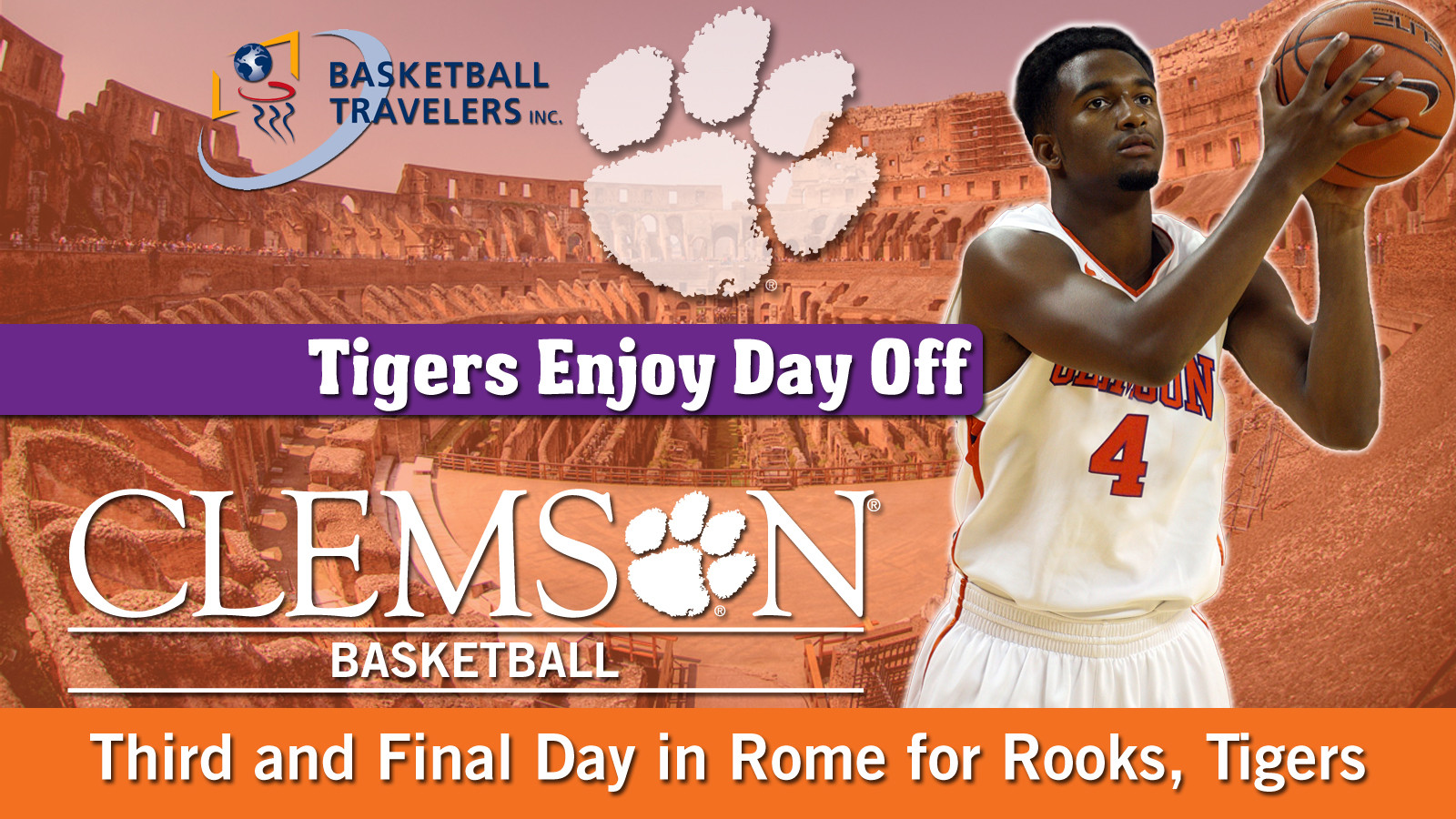 While Sunday was considered an off-day for the team, some friends and I spent most of our final day in Rome soaking in more of the culture by exploring the city.  We divided the day into two parts.  I only wish we had a pedometer to measure how many steps I took and miles I walked, because it had to be a large number.

In the morning, we passed some sights we had already seen (Spanish Steps, Trevi Fountains and Pantheon) before seeing the Castel Sant’Angelo on our way to St. Peter’s Square.  We arrived at the square about 10 minutes before Pope Francis came out of a top story building to our right as we faced St. Peter’s Basilica, where he delivered a 15-minute message to a crowd of thousands.

Coach Brownell and some of his assistants made it just in time to see him come out to quite the ovation.  Once my group left the scene, someone in front of me shouted, “Whoa, Clemson?!”  The individual then showed me his class ring from 2012.  I explained that we were here on a 10-day tour of Italy, and that Coach Brownell was 50 feet away.  Coach later confirmed in the hotel lobby that the alum introduced himself and spoke to him for a few minutes.  You never know where you’ll encounter Tiger Nation!

In the afternoon, my same group ventured through what was essentially more of a hotel and business district of Rome – rather than a tourist area.  We even saw the U.S. Embassy on our walk.  Ultimately, we ended up in the same typical tourist spots we had seen most of the past three days.  But with the help of a local resident who saw us looking at our map, he pointed us in the direction of the Vittoriano, a giant building in honor of the first president of unified Italy.  Atop this monument are two bronze statues, symbolizing unity and freedom.  From behind this building, we caught amazing rooftop glimpses of the Colosseum that we had not seen before.  This structure, as well as the St. Maria Basilica which housed over 50 crystal chandeliers, were the afternoon tour highlights.

Overall, our three days in Rome were amazing!  I know the players and staff certainly enjoyed the stay, and I caught up with freshman guard Patrick Rooks to discuss some of his experiences in Rome, as well as get some thoughts from last night’s game against the Italy All-Stars.

Q: What are the biggest cultural differences you’ve noticed between life in America and Italy?Rooks: “Driving in from the airport to the hotel, I was shocked to see it was a little dirty.  But as we got deeper into the city and saw all the sculptures, fountains, and people on mopeds and in smart cars, it was really pretty.  It’s a lot different, everything is so small and closer together.”

Q: Is there any particular sight you saw in Rome that stood out over the others?Rooks: “I really liked the Vatican.  I was amazed with the artwork.  The entire time walking through, I wondered how long it really took to get all that stuff done.  It was really cool to see all the colors and sculptures.  It was really nice.”

Q: Take me through the team’s first game in Italy.  How did it unfold from your vantage point?Rooks: “I believe we’re looking good right now.  Our ability to shoot the ball is a lot better.  We have more weapons on the team, so we’ll be looking good this year.  It was a good first game, getting to know each other better in different situations.  I’m looking forward to the season.”

Q: With a little bit of leg weariness in the first game, are you looking more forward to tomorrow’s game?Rooks: “Yes, definitely.  I didn’t know what to expect last night when I first got on the court, in terms of game speed and pace.  But it was fun.”

Rooks and his teammates will play their second game of the 10-day tour as the Tigers travel north to Florence during the day.  The game is scheduled for 9:00 PM locally.  We’ll have all the coverage and more on ClemsonTigers.com!