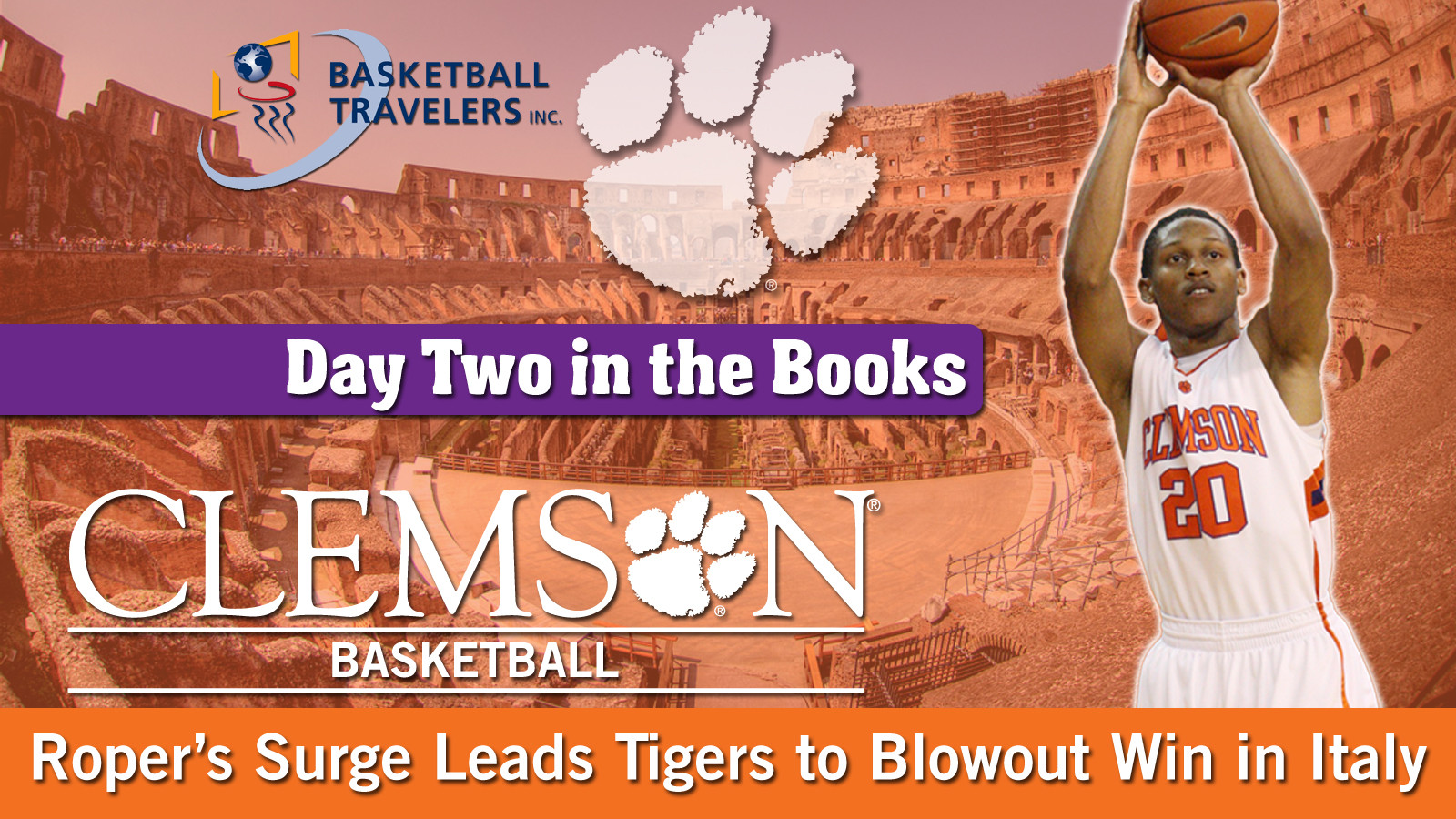 Day two focused on a tour of the Vatican and its most sought after tourist stops – the museum, Sistine Chapel and St. Peter’s Basilica.  Because the Vatican is a holy place, players, staff and their families were asked to adhere to a dress code that specifically discouraged bare shoulders and legs.  We arrived in two busloads – one carrying the team and families and the other a group of supporters – at approximately 10:30.

The tour lasted over three hours and was a phenomenal introduction to the Vatican’s place in the Roman Catholic culture and many of the facts behind its importance in general.  First, we progressed through the museum.  Like the Colosseum and Roman Forum on Friday, the views were spectacular.  From beautiful marble floors to various sculptures and exquisite tapestries, it was hard not to be impressed with the imagery.

The tapestries were particularly impressive.  Most were designed by Raphael in Brussels, Belgium.  These giant woven materials took anywhere from eight to 10 years to complete.  They hang in an area located ahead of another gallery before you descend a private-looking stairwell to the Sistine Chapel.  Because it is the Pope’s private chapel, tourists are constantly asked to be quiet to be respectful.  Many of you who saw the new Pope’s election saw that the ceremony took place in the Sistine Chapel.

Inside, words cannot describe the sheer images that literally jump out at you.  The colors are so vivid that pictures don’t do it justice.  Of course, you cannot take pictures inside so you wouldn’t find any in our photo gallery from today anyways.  As our guide explained, Michelangelo painted the ceiling in thirds.  In the first third, he painted groups of scenes and as he completed the final 2/3 of the project, he made the images bigger and bigger.  It was neat to see this in person after it was described to us before the tour.  Essentially, he did this so that visitors would have an easier time deciphering each illustration.

From there, we made our way to St. Peter’s Basilica – the largest church in the world.  It certainly looked like it from my vantage point, granted I have a small sample size to compare it against.  Outside, our guide showed us a bronze door that is known as a “Holy Door.”  There are four such doors in the city of Rome, and they are torn down every 25 years and replaced.  The destruction is supposed to symbolize sins being washed away.  The last “Holy Year” was in 2000, so it was explained to us that this particular bronze door would be replaced at the end of 2024.

Inside St. Peter’s, it can hold up to 60,000 standing visitors!  We saw a famous sculpture by Michelangelo, as well as various tombs and statues honoring former Popes.  One displayed John XXIII, who was so beloved he was entombed for all to see with a wax mask covering his body.  As you’ll see in the photo gallery, the Papal Altar in the center is personally used only on special occasions (i.e. Easter, Christmas, etc.).  As we exited and concluded the tour, we got our only view of the famous Swiss Guards.  It was explained that all are personally chosen by the Pope, and serve two-year terms after their military tours are completed.

The Tigers shrugged off a difficult start, adjusting to both the FIBA rules and officiating as well as the fatigue of overseas travel and two lengthy walking tours in the 33 hours prior to Saturday’s 7:00 start.  Ironically enough, it was walk-on Carson Fields who seemed to jump-start the Tigers with a three from the right wing.  He played well, finishing with five points and a blocked shot in 10 minutes.

The highlight play of the game was provided by sophomore Jordan Roper, who followed a teammate’s missed shot in the third quarter with an emphatic tomahawk jam while being fouled.  In both a great show of sportsmanship and a light-hearted moment, the Italian player guilty of the foul actually high-fived Roper before he shot his free throw.

Roper led the Tigers with 21 points, including 19 in the second half.  Devin Coleman, playing his first game against an actual opponent since March of his freshman season in 2011-12, made 5-of-9 field goals and totaled 13 points.  Josh Smith led the board attack with 14 rebounds, while classmate Landry Nnoko added 10.

Click the video link above to hear more from Roper and Head Coach Brad Brownell after the team’s first game in Italy.  Check back Sunday afternoon for a complete report of the Tigers’ off-day and final time spent in Rome.