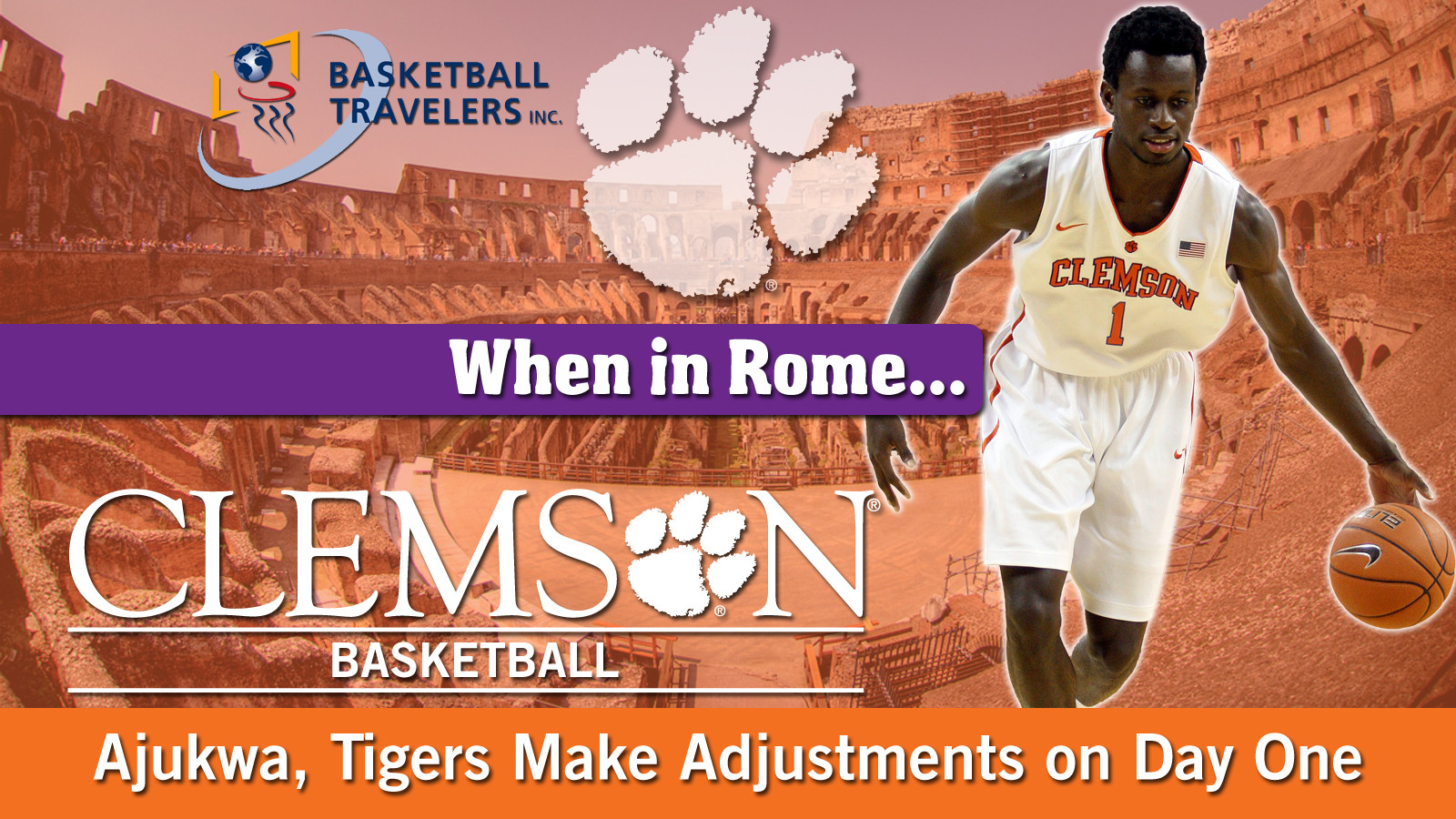 It’s been an exhausting 24 hours for the men’s basketball team, but well worth it.  After a delay of two and a half hours past our original departure time, we took off around 6:25 PM on Thursday in Atlanta.

The service on the flight was outstanding.  The attendants came through with a dinner, a light sandwich a couple of hours later and a breakfast sandwich in the morning as we approached Rome.  On top of that, each seat had its own personal television with many movies from which to choose.  I watched ’42,’ the story of Jackie Robinson’s breakthrough in Major League Baseball.  It was an inspirational film as you can imagine, I only wish it inspired me to actually sleep at some point during the nine and a half hour trek.

We landed in Rome around 9:45 AM locally, but we were held up after one support staff member misplaced his iPad and another could not locate our video tripod.  He was eventually able to find it 45 minutes later several luggage chutes down from ours, but not before the majority of us left for our scheduled tour at the Colosseum and Roman Forum.

The walking tour lasted about 75 minutes, and it was fun to soak in the impressive architecture of the Colosseum.  The most mind-boggling thing I learned on the tour?  The structure took just 10 years to build.  Think about that for a second.  Just 10 years, in those ancient times?  That’s nothing short of miraculous in my book.  It’s truly a work of art and a treasured piece of Roman culture.

After checking in to our hotel and getting some well-deserved down time, several small groups went out to see further sights Rome had to offer.  I tagged along with Lucas McKay, our video coordinator, Aaron Dunham of our major gifts team, Leslie Moreland-Bishop, our academic advisor, and others on a walk through the historic district of the city.  We visited the Spanish Steps, a steep 135-step climb from bottom to top.  We saw the Trevi Fountains, one of the most famous in the world.  We ended by visiting the Pantheon, another splendid piece of architecture featuring a huge domed roof and exterior columns that towered above the ground.

Earlier in the day, after the Colosseum tour, Coach Brownell’s father Bob leaned over his chair on the bus seat behind me and asked a question that had an obvious answer.  “Everything just seems so old, doesn’t it?” he asked.  Yes, it does.  But after spending a lot of time in town, I can see that it also makes Rome a beautiful city.

We returned after dinner about 9:45 PM locally, where I met with freshman wing Austin Ajukwa in the lobby.  The 6-foot-5 native of Columbia, SC had the following thoughts on day one of our #NCAAtour in Italy.

Q: Before yesterday’s flight, what was the furthest distance you have traveled on a plane?Ajukwa: “I’ve been to Nigeria twice.  My parents are from there, but I was born in Columbia.  I can’t remember how far it was because I was in the fifth grade the last time I went.”

Q: Take me through the tour of the Colosseum and the Roman Forum.  What stood out to you?Ajukwa: “It looked a lot different seeing it in person, as opposed to what we learned the last three weeks in class (he and his teammates took a one-credit international studies course taught by Dr. Greg Ramshaw).  We learned about Italy’s culture versus our culture in America.  We learned the differences in their pastime versus ours.”

Q: Did you learn anything about the Colosseum or ruins that you didn’t learn in the classAjukwa: “One neat thing was learning the schedule of the Gladiator Games and how that went about each and every day.”

Q: After your tour, did you spend any more time in the city or did you just shut it down?Ajukwa: “A few of us went across the street to eat some pizza.  We came back to the hotel and just chilled out after that.”

Q: What do you think about heading to see the Vatican tomorrow?Ajukwa: “My group actually did a presentation for our class on the Vatican.  I’m pretty excited to see that.  It’ll be interesting to see where the Pope resides.  I also found it interesting that you cannot show your shoulders or legs.  You have to be more respectful than even church in America.”

Q: Are you ready for your first game against another opponent on Saturday evening?Ajukwa: “I’m excited to play against pros, especially since it’s before our NCAA season starts.  It’s going to be a really good experience.  We’ve gotten some positive feedback so far.  It was good to get 10 practices before the season starts.  Coach Brownell wants our style to be a little different this year, so it’s good to get an early start so we can listen and understand what he wants us to do on offense and defense.”

We’ll have plenty more on day two as the Tigers play their first game of the trip, as well as tour the Vatican.  It’s way past time to turn in for the night.  Ciao!