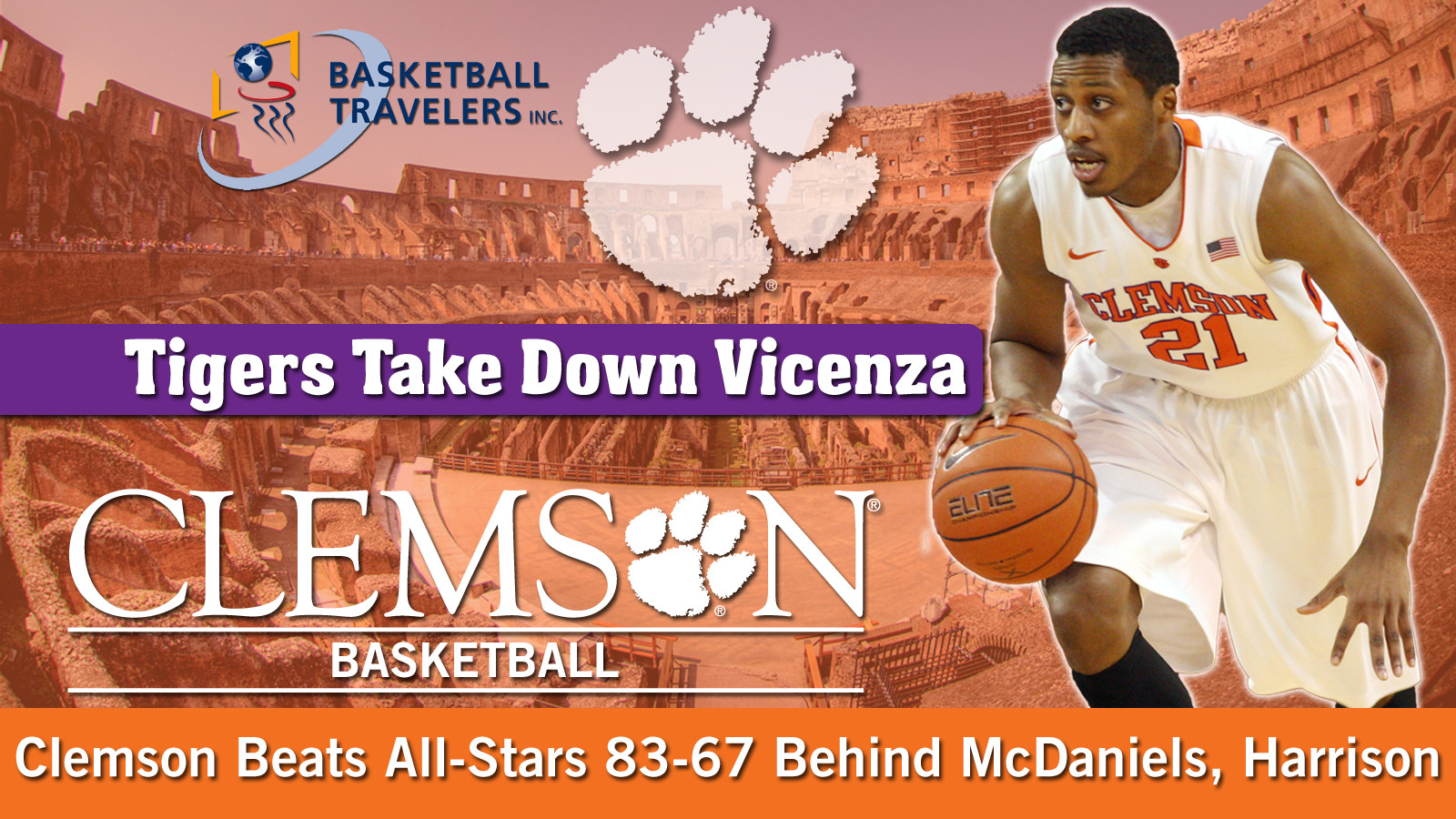 Our group left Florence around 9:45 AM locally, and stopped two hours later per Italian law so that the bus driver could rest for 45 minutes.  That’s been the case in both of our bus trips between cities.  We stopped at another Auto Grill, where we re-boarded and were on the road again shortly after 12:30.

Approximately 2:15, we arrived at the Villa de Michelangelo, a remote, mountainside resort in the town of Vicenza.  Our bus gave the driver a loud ovation as he navigated us to safety despite steep, narrow roads and the fact he had to turn us around in the middle of a small village.

Despite its remote location, the villa actually provided spectacular views of neighboring mountains and beautiful countryside.  The wifi provided was only good for the lobby, so as you can imagine just about everyone in our party hung out in the common area for most of the afternoon.

Carson Fields, who has had two outstanding games in Italy, was one of those players.  However, he was taking jabs from teammates Jaron Blossomgame, Patrick Rooks and Jordan Roper on his excessive facial hair.  Jaron was casually urging him to shave his beard and just go with a mustache for tonight’s game, but Carson was having none of it.  “I feel disgusting,” he said at one point.  Despite that, Carson still didn’t shave for tonight’s game.  He said he’s waiting until Friday.

All week long, we’ve been waiting for a particular photo opportunity with the team.  Early on the trip, we noticed several Esso gas stations throughout Italy.  Coach Brownell’s wife, Paula, came to me with the idea of having the team take a picture in front of one and sending it back home.  Well, we finally found the perfect opportunity!  On the way to today’s game, we rode right by one.  Coach had the players and staff jump off the bus and we took a few shots, and included the best one in our photo gallery.  I’ll have to send the image back home to my friend, Candice Bell, who manages the Esso Club in Clemson.  Her husband, K.C., works in the athletics department with our facilities and grounds staff.

Tomorrow is a day we’ve all been looking forward to since we arrived.  We head to Venice in the morning, which is about 45 minutes to an hour away from our hotel.  We will board a boat and enter from the Grand Canal, before spending time walking the streets to see the sights and also visit another famous cathedral.  We’ll have entire coverage of our day in Venice, so be sure to check back in Thursday evening.  Ciao!

What a fun game!  We finally had what felt like a basketball game atmosphere.  The crowd was large and very much into the game.  The Vicenza natives fell in love with K.J. McDaniels from the get-go, as he put on a dunking and high-flying exhibition.  The most indicative sequence of his outstanding effort Wednesday was when he soared through the air to block a Vicenza shot with both hands, grab the rebound and then sprint the floor to follow a teammate’s miss with a dunk.

When the game was over, the Vicenza people handed out a trophy to the team and MVP award to McDaniels, who had 20 points to lead all scorers.  He added nine rebounds and two blocked shots in a fine effort.  In all, four players had double figures, including Damarcus Harrison with 18, Landry Nnoko with 11, and Jordan Roper with 10.

Here are some other observations from Wednesday’s game vs. the Vicenza All-Stars: