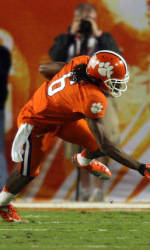 The play of the game came late in the first quarter when West Virginia’s Darwin Cook took the ball out of Clemson’s Andre Ellington’s hands as he started to fall at the Mountaineers’ one-yard line. The defensive back then raced 99 yards for a touchdown. The run was the longest defensive touchdown in Orange Bowl history, which sparked a 35-point second quarter for the Mountaineers.

“That was a 14-point swing,” Swinney said. “That was like a virus. Three of the turnovers we committed tonight went for touchdowns. You can’t do that against a very good offense like theirs.”

Trailing 21-17 early in the second quarter, Clemson drove the football to the Mountaineers’ four when Ellington ran up the middle to the one. Most in the stadium thought Ellington had scored, but Cook came out of the pile at the goal line and raced 99 yards untouched. The play was eventually reviewed by the replay booth and the play on the field was confirmed as a fumble and a touchdown return.

The Tigers (10-4) never recovered after that. Though the Tigers moved within 28-20, West Virginia went on a six play, 64-yard drive, which was capped by a Geno Smith seven-yard touchdown that gave the Mountaineers a 35-20 lead with 2:29 left in the first half.

Trying to get some kind of momentum, quarterback Tajh Boyd, who threw for 250 yards in the game, forced a pass on Clemson’s next possession to Sammy Watkins, which was intercepted by West Virginia’s Pat Miller and returned six yards to the Clemson 32. Three plays later, Smith found Tavon Austin for a three-yard touchdown pass and a 42-20 lead with 1:13 to play.

On Clemson’s next offensive play, Boyd scrambled for eight yards, but defensive end Bruce Irvin stripped him of the ball before he went down and the Mountaineers recovered the loose ball on the Tigers’ 18-yard line.

For the third time, West Virginia took advantage of a Clemson mistake as Shawn Alston recorded his second touchdown of the half when he rushed one yard for a touchdown with four seconds to play in the opening half. The Mountaineers led 49-20 at the break.

The onslaught continued in the second half as the Mountaineers scored on their first two offensive possessions. Smith completed touchdown passes of six yards and 37 yards to Stedman Bailey and Austin to build their lead to a 63-20 advantage.

West Virginia’s 35 unanswered points came to an end late in the third quarter when Boyd hit DeAndre Hopkins, who had 10 catches for 107 yards, for a 28-yard touchdown pass with 1:37 to play. It was Boyd’s second touchdown pass of the game. He also hit Watkins for a 27-yard pass with 4:38 to play in the first quarter.

Clemson started off the night with a bang when Ellington, who rushed for 116 yards, went 68 yards for the game’s first score. After West Virginia tied the game with a four-yard Alston run, the Tigers answered with Boyd’s 27-yard touchdown pass to Watkins.

Clemson got the final score of the night on a four-yard Roderick McDowell touchdown with 1:01 to play.