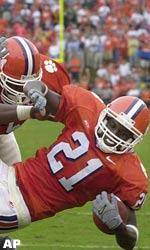 CHARLOTTESVILLE, Va. – Billy McMullen ran for the go-ahead touchdown and Matt Schaub threw for another TD as Virginia once again owned the second half and rallied to beat Clemson 22-17 Saturday.

The Cavaliers (5-2, 3-1 ACC) won their fifth straight game and did their best work in the second half, outscoring the Tigers 16-7. They have outscored opponents 140-70 after halftime this season.

The Tigers (3-3, 1-2), who started the game with a 19-play, 93-yard drive that ended with a field goal, managed only one more meaningful score and hurt their chances with two turnovers late in the fourth quarter.

A seven-play, 92-yard drive, capped by Charlie Whitehurt’s 10-yard touchdown pass to J.J. McKelvey, gave Clemson hope with 1:31 left, but Virginia recovered the onside kick and ran out the clock.

McMullen, whose 1-yard touchdown catch with 1 second left gave the Cavaliers a disputed 26-24 victory in Death Valley last year, this time scored on a 1-yard run on fourth-and-goal with 14:16 to play.

The Tigers got the drive going with consecutive 15-yard penalties, and a stumbling McMullen took it the final yard for the lead.

His run gave Virginia a 13-10 lead, and Kurt Smith added a 21-yard field goal – his third of the game – before Schaub converted Rich Bedesem’s interception into a 15-yard TD pass to Heath Miller with 4:08 to play.

Schaub, one of the nation’s top-rated passers, was 23-for-32 for 208 yards. He connected with tailback Wali Lundy 11 times for 78 yards, allowing Lundy to break the school record for receptions by a running back (nine).

The go-ahead drive started with Schaub running for 10 yards and the Tigers getting called for a personal foul. On the next play, Schaub threw deep for McMullen, and he was pulled down by Kevin Johnson – another 15-yard flag.

Smith also kicked field goals of 42 and 28 yards for Virginia.

The Tigers led 10-6 at halftime, thanks to a late first-half mistake by Schaub. Rolling left, he tried to throw deep to McMullen, and Brian Mance made a diving interception. One play later, Tye Hill took a handoff, ran wide to the left and raced untouched up the sideline for the touchdown.

It was the Tigers’ last scoring play until the final two minutes.

Clemson’s 93-yard, 19-play drive was its longest possession in terms of plays since 1979, when the Tigers also had a 19-play drive in a game against Georgia.