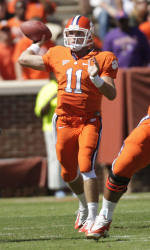 White caught six passes for 90 yards, finished with 89 yards rushing and scored on runs of 4 and 26 yards.

T.J. Yates was 18-for-34 for 164 yards with a 9-yard touchdown pass to Jheranie Boyd for the Tar Heels (3-2, 1-1 Atlantic Coast Conference). They coaxed just enough production out of the offense to beat the Tigers for the first time since 2001.

Kyle Parker’s 74-yard TD pass to Jaron Brown with 5:31 left pulled the Tigers (2-3, 0-2) within five, but they couldn’t convert the two-point attempt and didn’t get the ball back until only 13 seconds remained. Parker then threw three deep passes, all incompletions.

He finished 21-for-38 for 214 yards for the Tigers, who were held to a season-low 305 total yards and lost their second straight.

The Tar Heels – who finished with 255 total yards and were held to 15 total yards in the third quarter – certainly needed both of White’s scoring runs. Two plays after his 12-yard catch from Yates on fourth-and-4, White bounced off a series of tacklers on his way to the end zone. That 26-yarder came with 6:53 to play, when he bounced off a series of tacklers and scored from 26 yards out to extend North Carolina’s lead to 21-10.

Jamie Harper pulled the Tigers to 14-10 with a 10-yard touchdown run with 5 1/2 minutes left in the third. Clemson drove into North Carolina territory on its next possession, but the drive stalled at the 24 and Chandler Catanzaro’s 42-yard field goal was wide right.

Brown finished with 107 yards receiving on four catches for the Tigers.

On a day safety Deunta Williams returned to the Tar Heels following a four-game suspension, the school also announced a few hours before kickoff that reserve fullback Devon Ramsay – who had played in the previous four games – would sit out after additional information turned up in the ongoing NCAA investigation of the program. The school also said safety Jonathan Smith – who had been held out – would not play this season, but didn’t specify why.

That had the potential to create yet another distraction in a season full of them for the Tar Heels, but they certainly came out looking focused. White powered in from 4 yards out to cap their opening drive – a 12-play, 48-yard march during which Yates was 6 of 7 for 35 yards.

North Carolina’s offense was stuck in neutral for much of the rest of the half, with Yates misfiring on 7 of 9 attempts during a rough stretch that preceded his pretty 51-yard strike to a streaking White down the left sideline. That kept alive an 80-yard drive that the senior quarterback capped with his scoring pass to Boyd with 54 seconds before the half, putting the Tar Heels up 14-3.