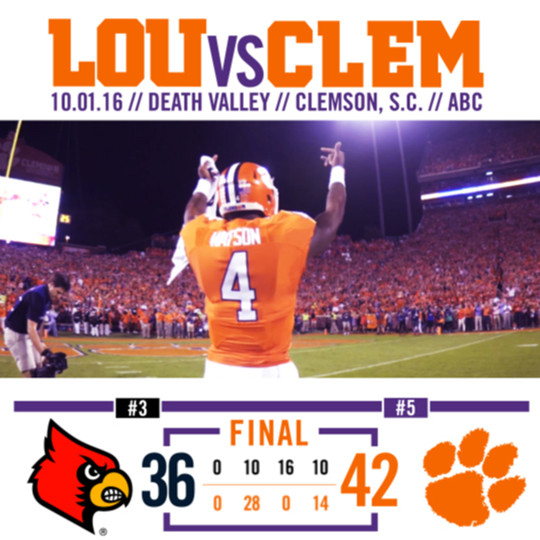 CLEMSON, S.C. – Marcus Edmond tackled James Quick one yard shy of a first down at the three yard line on fourth down with 33 seconds left in the game, as No. 3 Clemson held on for a thrilling 42-36 win over No. 3 Louisville at Memorial Stadium on Saturday night.

Led by quarterback Deshaun Watson, who was 20-31 passing for 306 yards and five touchdowns, the Tigers (5-0, 2-0 ACC) came out on top of the back-and-forth matchup featuring electrifying offensive displays from both teams. Clemson also upped its home winning streak to 19, the longest active streak in the nation.

“It was a great win,” said head coach Dabo Swinney. “Louisville played their hearts out. We stuck it out in the third quarter. We had the right plays.”

Defense was the story of the first quarter, as both teams struggled to manufacture any substantial drives. Clemson’s pass rush was particularly effective and pressured Louisville quarterback Lamar Jackson throughout.

The Cardinals (4-1, 2-1 ACC) were the first to score, as Jeremy Smith capped an 82-yard drive with a one-yard touchdown run in the opening minute of the second quarter.

The remainder of the quarter was practically all Clemson, however, with the Tigers outscoring the Cardinals 28-3. Deon Cain made a big splash during that stretch, hauling in two touchdown receptions that covered 70 yards altogether.

Following a fumble by Louisville’s Brandon Radcliff, which was the Cardinals’ third consecutive drive with a turnover, Clemson struck again. Wayne Gallman, who totaled 110 yards on the ground, sprinted into the endzone on a 24-yard run. Later in the quarter, Watson and Cain connected to put the Tigers up 21-7. Cain finished with four catches for 98 yards and two touchdowns.

The Cardinals added a field goal with under a minute to play in the half, but the Tigers were able to answer with a frenetic scoring drive in just 26 seconds. Advancing 73 yards in four plays, Clemson increased its lead to 28-10 on a five-yard touchdown pass from Watson to Artavis Scott.

A Louisville field goal on its next possession pulled it to within nine points. After a Clemson fumble in Louisville territory, Jackson drove the Cardinals 77 yards and finished the drive off with a one-yard touchdown rush.

The Cardinals pushed their run to 26-0 by scoring the first 10 points of the fourth quarter by way of a field goal and an 11-yard Jackson scamper into the endzone. In the wake of the score by Jackson, Scott provided the Tigers with excellent field position via a 77-yard kickoff return, then Watson found Mike Williams for a 20-yard touchdown pass.

The Tigers regained the lead on their next possession, as Watson finished off an 85-yard drive with a 31-yard touchdown pass to Jordan Leggett, who also hauled in a Watson pass for the succeeding two-point conversion.

Trailing 42-36 late in the game, the Cardinals marched down the field. But after a crucial pre-snap penalty on fourth-and-7, which made it fourth-and-12, Jackson connected with Quick near the sideline. An alert Edmond forced Quick out of bounds at the three, one yard shy of a first down.

Clemson returns to action on Friday at 7:30 p.m., when it travels to Chestnut Hill, Mass., to take on Boston College on ESPN.